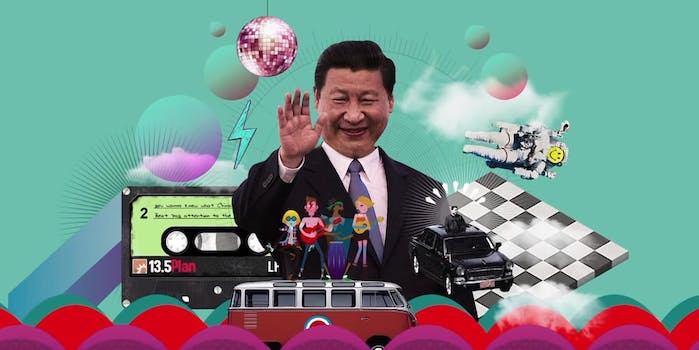 No way America creates a cutesy viral video about economic policy that is anywhere near this amazing.

In recent years, there’s been a considerable amount of hyperventilating among American politicians and pundits about how the U.S. is losing its competitive edge to China. While many of these worries can be easily dismissed as fear-mongering aimed at the darker, xenophobic corners of the American psyche, a video released this week by Chinese state-run news agency Xinhua reveals those fears about the waning of American power may be justified.

There’s no way the American government could create a cutesy viral video about national economic policy that is anywhere near this amazing.

Done in the campy style of the ’70s educational cartoon Schoolhouse Rock, the video gives a 101-level explainer behind the process of creating China’s 13th five-year plan—called the “shisanwu,” a portmanteau of the Mandarin words meaning 13 and five—for determining how the nation’s centrally planned economy will run for the next half decade.

The three-minute clip shows an eclectic collage of images like Chinese President Xi Jinping standing in front of a giant cassette tape, a hippie-era Volkswagen van, Albert Einstein, rubber duckies, Ping-Pong balls, astronauts, and, of course, a shirtless singer whose face is painted like David Bowie on the cover of Aladdin Sane.

One verse in the song lays out who is involved in creating the five-year plans: “But who makes all the plans? / There’s government ministers and think tank minds / And party leadership contributing finds / There’s doctors, bankers, and farmers, too / And even engineers who deal with poo! Eww! Umm, did I hear that right? / Yeah, it’s true!”

It’s kind of like the U.S. Office of Management and Budget’s Budget Execution Reports, except catchy as hell and also not like those at all.

“I think for the last few years, the Chinese government has tried to master the language of the meme culture of the Internet and new media,” Jeremy Goldkorn, founder of the Chinese social media tracking firm Danwei, told Marketplace, “and they’ve perhaps done it more successfully in the Chinese Internet. But this is one of the more interesting examples of them trying to do it in English to a foreign audience.”

Representatives from Xinhua did not immediately respond to a request for comment.

In contrast, the FBI can make serious half-hour long dramas about how American students studying abroad in Shanghai should maybe consider not becoming Chinese spies, but those things feel more like a “very special episode” of your favorite ’90s teen sitcom rather than something primed to go viral.

NBC News reports that it was created by Fuxing Road Studio, a video production house that’s made numerous propaganda videos for the Chinese government in the past also aimed at overseas viewers. The studio produced one earlier this year called “When China met Carolina” about the benefits of Chinese firms owning American factories.

The Chinese Communist Party’s Central Committee will release its 13th five-year plan—a system of economic planning originally created by Soviet leader Joseph Stalin in the late ’20s that has since been adopted by other communist governments—at the conclusion of a meeting in Beijing this week.

The approximately 100-page document will be the first five-year plan released under the leadership of President Xi Jinping and comes amid global fears of a slowdown in the country’s economic growth following a collapse in its national stock market.

It’s expected that the plan will involve a push to expand the Chinese economy beyond its long-standing base of manufacturing. “Shifting the focus from labor-intensive manufacturing to services will be of great importance to the national economy,” Liu Xuezhi, an analyst at China’s Bank of Communications, told the South China Morning Post. “It’s obvious that Chinese manufacturers are losing their competitive edge due to higher labor and land costs, and it is the services sector that could help those workers who lose jobs at manufacturing plants.”

Sadly, “labor-intensive manufacturing services” is a tricky thing to rhyme, so the music video was unable to get into that level of detail.