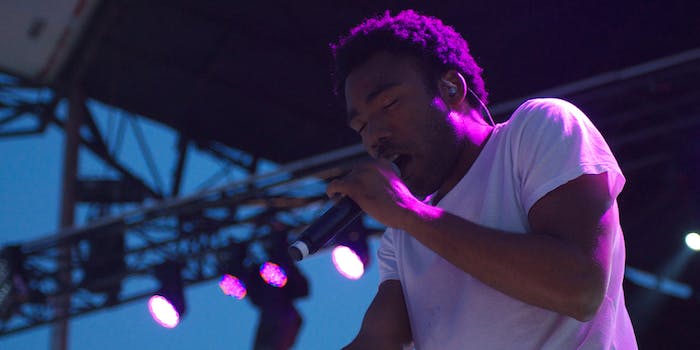 16 technology references made by Childish Gambino on the ‘Kauai EP’

What rhymes with 'XM Radio?'

Childish Gambino is immensely popular, I think, because the rapper (comedian Donald Glover) is able to aptly connect with Internet culture and enjoys an educated, affluent, young base. He lands blows with suburban references, and it’s non-threatening and charismatic even when he’s rapping about being a terrible person. But a big part of his brand revolves around cute lyrics about modern times.

His latest, KAUAI EP, is maybe his best. It’s a two-part mixtape—half traditional rapping over hotly curated radio beats (with DJ Drama there as an appropriated Atlanta hip-hop reference point), and half warmly produced R&B. While the latter half is beautiful and smooth, the beginning is classic Gambino: playing the outsider, dishing out Cookie Monster-scary threats, and, of course, rapping about technology. To wit, here are the 16 tech references nestled throughout his latest. No one ever said he was a master of subtlety.

1. Slide up in them DMs, her n*gga didn’t even notice, I’m focused

2. Three cellphones and I still don’t ever call ’em / Why would I call ’em? Bitch you know I’m ballin’

4. My life inside a computer, back up—my soul to the cloud

5. Got that buzz, the phone was silent

6. She want some pics, I’m like “oh well, you better Google search” / money rule my universe

7. Hit me on my Nextel chirp, when you heard that *brrrp* *brrrp*, mean that n*gga got some work

10. Old school on the XM got your auntie singing

11. Childish y’all know the name, getting hate from Charlemagne*

*Glover and radio personality Charlemagne had beef. Glover blogged about it and this clip details the skirmish.

12. Bunch of crab-ass bloggers got me allergic to shellfish / If I fell off in a day, man, these n*ggas be helpless

13. After his rap on the “Go DJ” beat, Glover shouts out the following titans of tech, saying, “You’ve been fucking with me since the beginning.”

14. I ain’t afraid to drop a couple Sky Miles

15. Shots from a redbone / talking ‘bout her skin tone / her color beats headphones

16. I’m on that Willy Wonka, green so Blanka