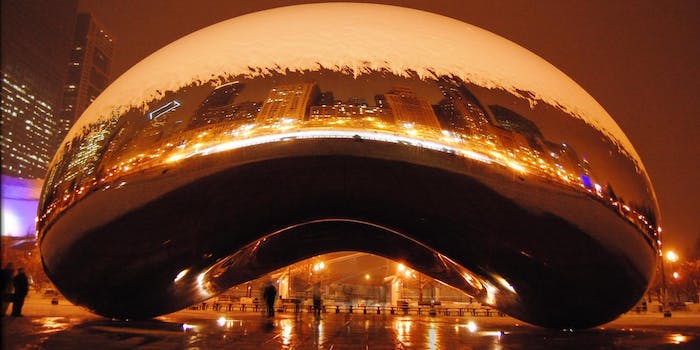 This is just the beginning.

Hundreds gathered on the streets of Chicago on Tuesday night to protest the shooting death of a teenager by a police officer.

Van Dyke turned himself in on Tuesday morning. He has been charged with first-degree murder of McDonald and faces up to life in prison.

The protests, which were heavily livestreamed on Periscope, disrupted traffic but did not appear to result in overt violence from either demonstrators or police, at the time of publication.

Large crowd at Michigan & Washington. Keep in mind the tree lighting is going on across the street pic.twitter.com/dFOSCU6nCY

Activists took to the streets in reaction to the release of a police dash-cam video #Chicago #LaquanMcDonald pic.twitter.com/uVivz6Y9EF

At 8:30pm CT, protesters arrived in front of a police station where they believe police detained three demonstrators, according to reporters on the ground.

People lining up in front of police station where organizers say 3 arrested protesters have been taken #Chicago pic.twitter.com/NysSLAnWg8

Protestors make a line in front of the police station #LaquanMcDonald pic.twitter.com/Fuxf434g26

During a news conference on Tuesday evening, Chicago Mayor Rahm Emanuel called on demonstrators to remain “calm,” and asked Chicago residents to remain resolute and strong during a testing time.

“Will we use this episode in this moment to build bridges that connects us as a city or to build barriers that separate us as a city,” Emanuel said, adding, “It is fine to be passionate, but it is essential that it remain peaceful.”