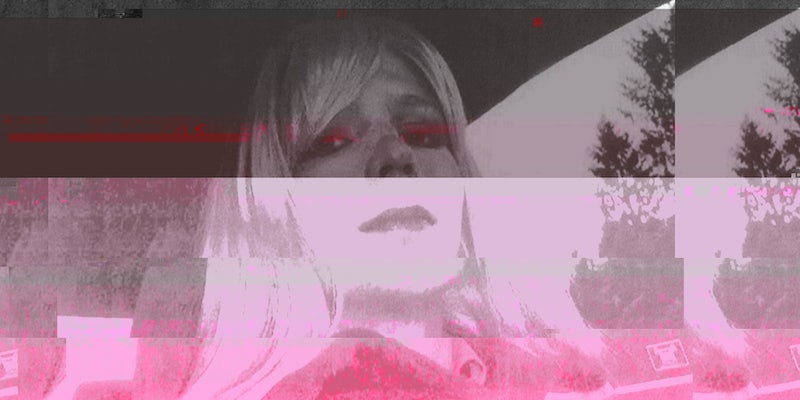 Stop calling her a pacifist.

The message? Stop referring to her as a pacifist. She’s surprised that she even had to make this point.

Manning is transgendered, and was previously known as private Bradley Manning before being sentenced in August to a 35-year prison term for passing Army intelligence documents to WikiLeaks.

The statement stems from Manning winning the Sean McBride Peace Award in September, which was accepted on her behalf by anti-war veteran Ann Wright. Anti-war activists have used a video of an Army helicopter mowing down Iraqi civilians—which Manning leaked—as evidence that the U.S. military should leave Iraq.

In her acceptance speech, Wright said Manning was “deeply honored” and was “overwhelmed that such an organization would recognize her actions as actions for peace.”

There was one slight problem with that, Manning said in a two-page statement issued to the Guardian and released Wednesday. She’d never heard of the Sean McBride Peace Award.

More importantly, she said, just because she was horrified that the army kept a civilian massacre under wraps, that doesn’t make her a peacenik.

“[I]t’s not terribly clear to me that my actions were explicitly done for ‘peace.’ I don’t consider myself a ‘pacifist,’ ‘anti-war,’ or (especially) a conscientious objector,” she wrote.

Instead, she wrote, the ideal she’d tie her actions to is “transparency.”

“I feel like the public cannot decide what actions and policies are or are not justified if they don’t even know the most rudimentary details about them and their effects,” she wrote.

That’s a reference to the fact that Manning’s leaks, unlike, say, those former National Security Agency contractor Edward’s Snowden’s, were completely unredacted, and distributed wholesale.

In other words, she’s not a fan of people putting words in others’s mouths.