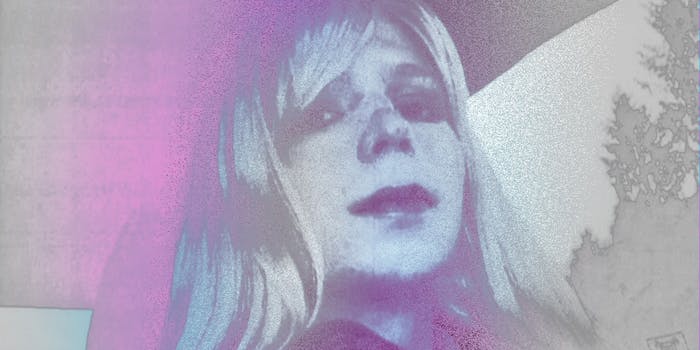 The Department of Defense indicated it would get her treatment months ago. Then nothing happened.

Chelsea Manning is suing the U.S. military over gender treatment she was promised but never received.

One of the most influential and controversial leakers of classified information in decades, Manning is currently serving out a 35-year sentence. In 2010, as an Army intelligence analyst going by her birth name of Bradley, she leaked a trove of classified documents to WikiLeaks, including a video that appeared to show an Army helicopter shooting down Iraqi civilians.

From prison, Manning came forth as trans, and requested to be referred to as a woman named Chelsea. Initially, it appeared the government would respect her status. In May, Department of Defense (DoD) officials said they were attempting to move her from a military to a civilian prison in order to give her hormone therapy, and Defense Secretary Chuck Hagel called for a clearer policy on assisting trans people in the military.

Since then, Manning and American Civil Liberties Union (ACLU) say, the DoD has dragged its feet, and have “violated the Constitution by denying [her] medically necessary treatment for her diagnosed gender dysphoria, a serious medical condition,” according to the complaint.

“Such clear disregard of well-established medical protocols constitutes cruel and unusual punishment,” Chase Strangio, one of Manning’s ACLU attorneys, said in a statement.

The complaint itself isn’t a surprise. The ACLU sent a complaint to the same parties back in August, threatening a lawsuit if they didn’t comply by Sept. 4.

A spokesperson for Department of Defense didn’t respond to the Daily Dot’s question of whether it planned to treat Manning soon. “As a matter of long-standing policy, we do not comment on pending litigation.”

H/T The Guardian | Photo via chelseamanning.org | Remix by Jason Reed