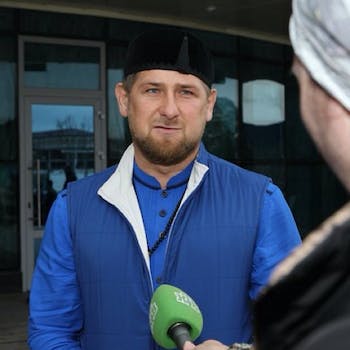 Chechen president: “Seek the roots of evil in America”

Ramzan Kadyrov, president of the Chechen Republic, took to Instagram to denounce attempts to tie the Boston Marathon bombing suspects to his country.

Ramzan Kadyrov, president of the Chechen Republic, claimed any attempts to tie the Boston Marathon bombing suspects to Chechnya are in vain.

“They grew up in the United States, their attitudes and beliefs were formed there,” Kadyrov wrote on Instagram. “It is necessary to seek the roots of evil in America.”

Brothers Tamerlan and Dzhokhar Tsarnaev were identified by police as suspects in the incident, which claimed three lives and injured more than 170 others. Tamerlan died in a clash with police early Friday, and Dzhokhar is still on the run at the time of this writing.

The brothers were born in Chechnya. They fled the region with their family in the early ’90s amid conflict and became U.S. residents after several years living in Kazakhstan.

Kadyrov has more than 116,000 followers to his credit on Instagram, where he’s uploaded more than 500 photos to his account. It’s as good a platform as any to share his statement with the world.

He was keen to distance Chechnya from the suspects while expressing sympathy for the bombing victims. Here is a Google Translate version of his statement, which was issued in Russian.

The tragic events took place in Boston. The blast killed people. We have previously expressed their condolences to the people of the city and the people of America. Today, as reported by the media, while trying to arrest a Tsarnaea was killed. It would be logical if he was detained and investigated, [and the courts] found all the circumstances and the degree of his guilt. Apparently, the special services needed by all means to calm the result of society. Any attempt to make the connection between Chechnya and Tsarnaevymi if they are guilty, [is in] vain. They grew up in the United States, their attitudes and beliefs were formed there. It is necessary to seek the roots of evil in America. From terrorism to fight the whole world. We know better than anyone else. We wish recovery to all the victims and share the feelings of sorrow Americans. #Boston # bombing #investigation 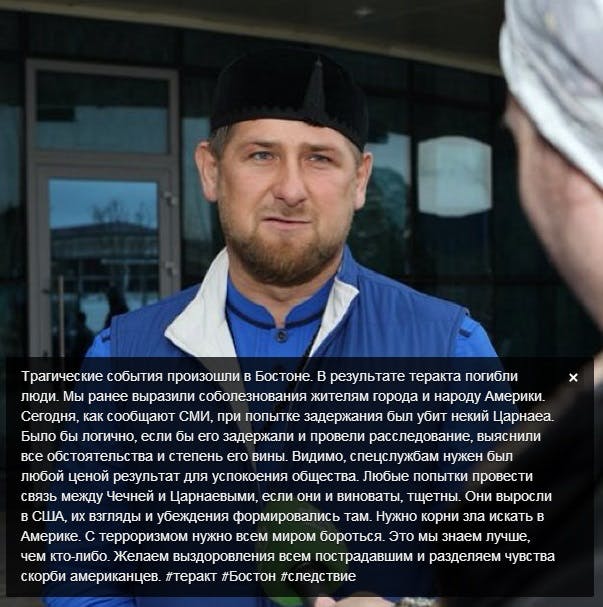 This isn’t the first time Kadyrov has become the center of attention on Instagram. Another Instagram account depicting him as an action star—hugging a tiger, posing with a rifle—went viral earlier this year.