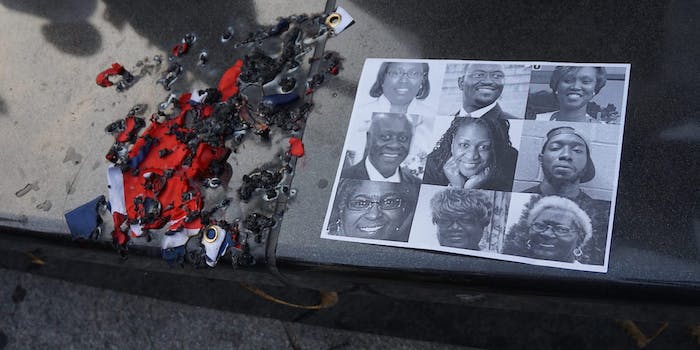 One year ago Friday, nine parishioners were gunned down in a senseless act of hatred at a historic black church in Charleston, South Carolina.

When confessed shooter Dylann Roof reportedly drew his .45-caliber Glock handgun, 26-year-old Tywanza Sanders rose to his feet trying to shield his elderly aunt from the aim of the gunman, all the while pleading for the lives of his fellow Christians. The gunman, a 21-year-old white man described by friends as an outspoken racist with segregationist views, opened fire, killing Sanders, his aunt, and six other members of Emanuel AME Church.

Daniel Simmons, a 74-year-old pastor of an Episcopal church in the nearby town of Awendaw, later succumbed to his wounds at a hospital, becoming the ninth victim of an attack that evoked memories of white-supremacist terrorism visited upon black churches during the Civil Rights Era more than 50 years ago.

The bloodshed sparked two political battles in its aftermath. One sought to strengthen the firearm regulations that hadn’t prevented Roof from acquiring his gun, a failure attributed to a breakdown in the federal background-check system. The second was a renewed call to ban Confederate flags—Roof had repeatedly posed with one in photos—from being displayed on publicly-owned property, including the South Carolina State House where it was always prominently on display.

One battle is over, while the other has been endlessly deferred.

The Confederate flag, which had been erected atop the statehouse in 1962 to protest desegregation, was lowered from a 30-foot pole at a memorial site on the front lawn where it had been relocated to sixteen years prior. Concluding a decades-long battle over the symbol of African-American slavery, and despite the protests of the Ku Klux Klan, the flag was transferred to a military museum in Charlotte, where it remains on display as a Civil War relic.

Conversely, a year to the day of the massacre, there has been no movement on proposed legislation to address a fatal flaw in the background check system exploited by Roof—and countless others—to acquire the murder weapon, despite a felony drug charge that should have prevented the sale.

Under federal law, the Federal Bureau of Investigation had three business days to process the background check initiated by the dealer who sold Roof his gun. When the dealer didn’t receive a response in the allotted time, the law permitted the dealer to complete the sale.

In the wake of the massacre, this technicality came to be known as the “Charleston loophole.” Roughly a month after the shooting, Rep. James Clyburn (D-S.C.) introduced a bill aimed at ending the so-called “default proceed” rule. A separate bill that would allow the FBI up to 28 days to complete a background check was introduced in early December by state Sen. Marlon Kimpson (D), whose district includes Emanuel AME Church. To date, neither bill has received a hearing.

Victims of gun violence are expected to deliver personal testimony during a special hearing before South Carolina lawmakers in Charleston at some point this summer.

While the country mourns the deaths of 49 people brutally executed on Sunday morning at an Orlando, Florida, nightclub—the deadliest shooting in United States history—gun manufacturers and their investors enjoyed a shower of profit. Anticipating an increase in sales, Smith & Wesson’s stock rallied by 7 percent on Monday, just hours after the attack, while Sturm Ruger’s stock rose by 9 percent.

According to FBI data, the number of background checks requested this year is 31.5 percent higher than at this point in 2015.