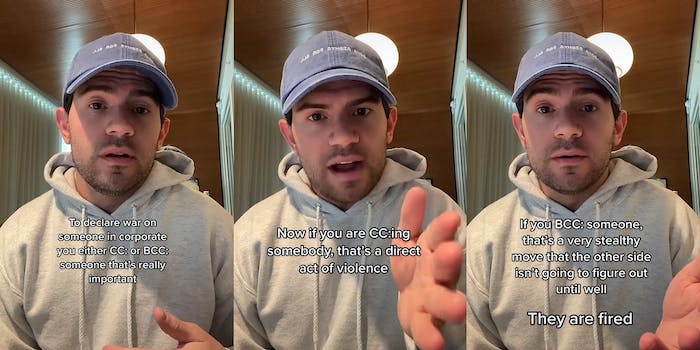 ‘If you’re CCing somebody, that’s a direct act of violence’: Attorney explains the ‘art of war: corporate’

It's a how-to on weaponizing work email.

It can be a challenge to survive, let alone thrive, in the corporate world. The communication style is different, the culture can feel artificial, and it’s difficult to tell the difference between an ally and an enemy. In fact, on a given day, a colleague may suddenly shift between friend and foe.

A viral TikTok offers some helpful and hilarious advice on the fine art of corporate warfare—specifically doing battle via email.

“To declare war on someone in corporate, you either CC or BCC someone that’s really important,” Matt Margolis (@itsmattslaw) began on the TikTok, which he called “the art of war: corporate.”

“Now if you’re CCing somebody, that’s a direct act of violence,” he continued. “If you BCC someone, that’s a very stealthy move that the other side’s not going to figure out until, well, they’re fired.”

The TikTok exploded. In the day since Margolis posted it, it’s been viewed 1 million times. Nearly 100,000 have liked it and hundreds have commented.

Many shared their own strategies and techniques for waging war in professional settings.

One said they employ a tactic that could be described as the nuclear option.

“I cc everyone. No one is going to pull an underhanded passive aggressive crapfest on me. We’re all going to be transparent or I have nothing to say,” they wrote.

Others admitted to employing Margolis’ attack strategy. “I did this like 2 weeks ago and it resulted in an instant teams meeting. Good times,” said @leelowenstitch, apparently referring to conference software Microsoft Teams.

“I BCC’d the whole company when I left exposing an executive’s affair with a store manager,” said another.

Another said they’ve gone so far as to make it a family affair. “One time I CC their mother I found on Facebook lol,” they said.

Margolis, head of community at Lawtrades, told the Daily Dot that he’s personally experienced both sides of corporate warfare. “I have gotten the BCC and I’ve seen the BCC,” he said in a phone conversation on Thursday afternoon.

“You choose your battles in a war. I’ve chosen hills I’m willing to die on,” he added.

Margolis has gone viral before, on TikTok, Twitter, and even LinkedIn. Of LinkedIn, he unironically said, “I don’t just like it. I love it.”

He believes that the trick to going viral is finding things that are relatable to everyone, which is why he believes the art of corporate warfare TikTok did so well.

“I just think it truly resonated with people either because they’ve been on the receiving end of an act of war or they themselves are soldiers in a corporate battle,” he said.