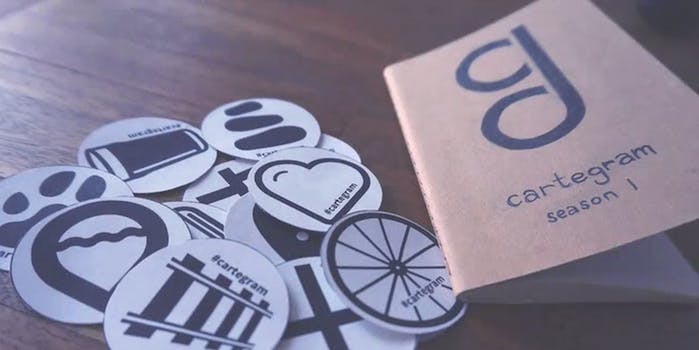 It's a scavenger hunt for the modern age.

We already use photos to document modern-day scavenger hunts, but now we can make Instagram work with us in a scavenger hunt—all while breaking up the monotony of your Instagram feed.

Cartegram, the brainchild of CentUp’s Len Kendall, will turn your Instagram photos into a game, and it’s available on Kickstarter. The first three seasons, or volumes, of the game have been funded in a matter of days.

Kendall compared the game to a digital version of Choose Your Own Adventure.

“I want to encourage people to look up and see what’s around them,” he told Chicago Reader.

Anyone who wants to play will get a notebook and stickers, and are tasked with finding something that corresponds with the vague descriptions for each stage. Once you do, you’ll tag the object with a sticker, take a photo, and post it to Instagram with the appropriate hashtags.

It’s not fighting against our increasing use of smartphones for just about everything, but it incorporates it while allowing you to appreciate the real world.

“Smart smartphones have given us the opportunity to take and share photos, but they also distract us from paying attention to our beautiful surroundings,” Kendall wrote on the project page. “Cartegram is a game that nudges you towards exploring the real world by yourself, while also contributing to a vast global collaboration.”

In early testing stages he made 10 versions of Cartegram, and while the seasons available on Kickstarter are broad-ranged, he eventually wants to release more niche versions which will include road trips, zombies, beer and brewers, street art, and food themes.

Cartegram has already been funded, but there are still 18 days left to contribute to this modern-day scavenger hunt.

H/T Side Questing | Photo via Kickstarter