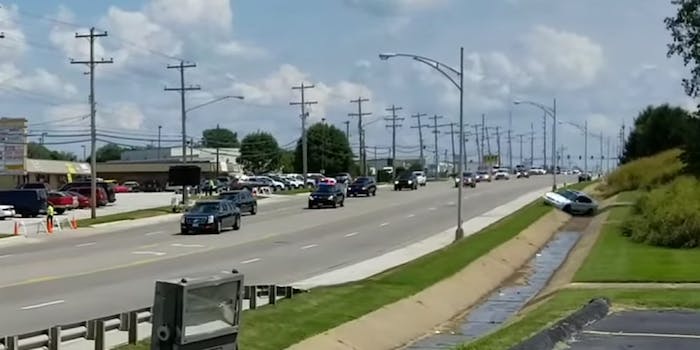 Police say the driver had no intent to harm President Trump. Many are unconvinced.

A car strangely drove out of the woods alongside a highway when President Donald Trump’s motorcade drove by earlier this week—and while local authorities have cleared the driver of any wrongdoing, that hasn’t stopped conspiracy theories from popping up online.

A YouTube video posted online on Wednesday shows the car, a white sedan, suddenly driving out of a wooded area as Trump’s large motorcade full of police vehicles drive down the highway in Springfield, Missouri, where Trump made a speech about his tax plan.

“Oh my gosh! Look at that car that just came out of the woods!” the man filming the video can be heard saying.

After jumping out of the woods, the car hits a small rainwater divot and pulls over as the motorcade speeds by. Soon several cars pull up next to the car and authorities begin speaking with what appears to be the driver.

The Springfield Police said there was “no intent of harm or disruption” to the motorcade. No arrests were made as a result of the crash, according to KOLR10. The station said the car’s brakes malfunctioned.

Despite the police’s determination that there was no intent to ram the motorcade, that hasn’t stopped people online from suspecting the worst.

Flew out of the woods, not a road…
I CALL BS and you should be ashamed for lying to #WeThePeople
Thank YOU Secret Service

There was no way this wasn't intentional. pic.twitter.com/zhkgVclZ5U

No answer as to exactly what the intent was? I smell spin…

The chances that it was just a coincidence that it happened at the exact same instant that the President drove by are infinitesimal. Arrest!

Numerous comments on the YouTube video also believe that the driver attempted to ram Trump’s caravan of cars, despite authorities saying otherwise.