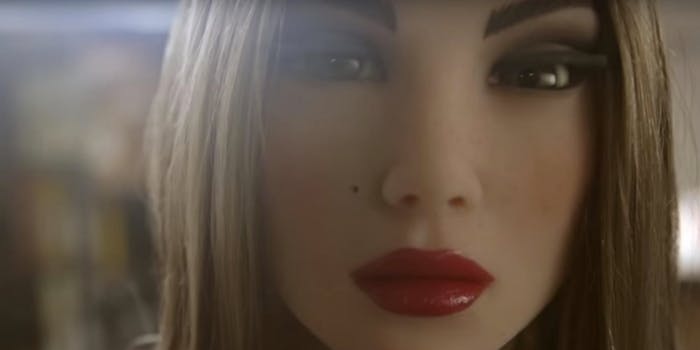 A robotics ethicist is urging the world to stop getting frisky with machines.

Kathleen Richardson of De Montfort University in Leicester, U.K., says that robots designed for sexual encounters with humans are so reductive in their purpose that they reinforce misguided notions about women. Speaking at the 20th annual ETHICOMP conference, a long-running university event surrounding issues of ethics and technology, Richardson went so far as to suggest that sex robots present a sociological threat, since they lend support to the the idea that a relationship need not be anything more than physical.

“I propose that prostitution is no ordinary activity and relies on the ability to use a person as a thing, and this is why parallels between sex robots and prostitution are so frequently found by their advocates,” writes Richardson, who works out of DMU’s Centre for Computing and Social Responsibility. “If anything the development of sex robots will further reinforce relations of power that do not recognise both parties as human subjects.”

Richardson’s presentation was based on her paper, “The Asymmetrical ‘Relationship’: Parallels Between Prostitution and the Development of Sex Robots,” and it served as the launch of her campaign against sex robots. Richardson claims to already have support from several like-minded organizations, including the Coalition Against Trafficking in Women and the Women’s Equality Party, UK, though a request for further clarification was not returned at press time.

DMU expert calls for ban on robots that can be used for sex http://t.co/0rajjta8Bv pic.twitter.com/7GQ3eLDudi

Richardson’s campaign for technological morality came about largely as a response to the ideas put forth by David Levy, author of the 2008 book Love and Sex with Robots,  and she name-checks him throughout her paper.

Levy suggests that bots and humans will enjoy bountiful sex lives together in the near future, and that bots will be invaluable for those who struggle with intimacy due to physical or emotional inadequacies. “There is an increasing number of people who find it difficult to form relationships and this will fill a void. It is not demeaning to women any more than vibrators are demeaning,” he told the BBC.

He believes that robots of a sexier ilk will meet a human need that would otherwise go unmet for some.

“As soon as someone launches a primitive sex robot that combines the technical capabilities of silicone dolls, à la RealDoll, with some vibration, some high-quality speech synthesis, and a few other technologies that already exist, then we will see the market starting to grow,” Levy told the Kernel earlier this year

Her critique of his anything-goes robot sex paradigm is that it too easily blurs the line between what is human and what is inanimate.

“Levy shows that [sex workers, human or otherwise] are seen by the [customers] as things and not recognised as human subjects,” she writes. “This legitimates a dangerous mode of existence where humans can move about in relations with other humans but not recognize them as human subjects in their own right.”

As machines increasingly step into territory more traditionally trod by humans—winning Jeopardy, playing fantasy football, and even killing people—the ethics surrounding their uses continues to blur. And while Richardson’s criticism might sound more like a sci-fi future than a pressing concern, the market for sex bots is already here—and it’s growing.

The notion of a present-day sex robot is perhaps best encapsulated by Roxxxy, a product by a company called True Companion. The $7,000 humanoid presents itself as docile, interactive furniture, with multiple programable personalities and circulatory system that is “always turned on and ready to talk or play.” Chief Executive Douglas Hines told the BBC that he’s received “thousands” of pre-orders.