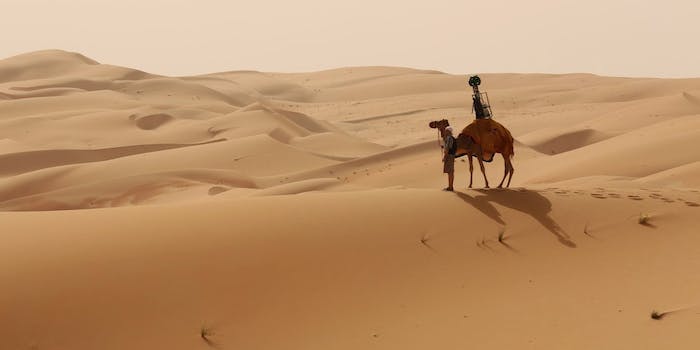 Google has already mapped countless miles of roads all around the globe for its ever growing Street View tool, but when it comes to mapping a desert, things get a little trickier. You can’t exactly cruise around the dunes in one of Google’s typical domestic mapping cars, so what can you do? Strap one of Google’s all-powerful 360-degree cameras to the back of a camel of course!

Thanks to the efforts of a very special camel named Raffia, you can now take a virtual trip to Abu Dhabi’s Liwa Desert, which normally would require you to catch a plane all the way to the United Arab Emirates. With Google’s Trekker camera equipped, Raffia and his guide traveled across the same dunes that the region’s merchants have for centuries.

The virtual journey will take you to all corners of the desert, including a stop by the lush greenery of the Liwa Oasis, which stands out as a beacon of life surrounded by miles and miles of sand. You’ll see farms of green fruit trees as far as the eye can see, before turning back around and venturing into the unforgiving desert once more.

If you’ve got some time and want to take a mini vacation to the Arabian peninsula, jump of Raffia’s back and relax with the full tour via Google’s Street View.