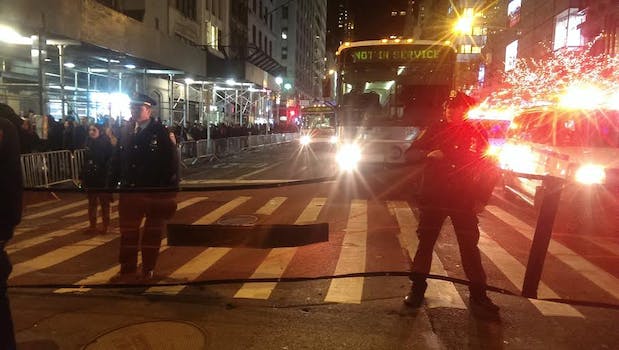 A similar incident took place at protests after the Mike Brown decision.

A man was hit by a cab in downtown Manhattan Thursday during the second night in a row of protests in the heart of New York City against a grand jury’s decision to not indict a police officer for choking Eric Garner to death on a Staten Island street.

At around 8pm ET, protesters near Broadway and Chambers Street in the Tribeca neighborhood of Manhattan witnessed a taxi cab hit a protester.

The condition of the protester is unknown.

NYC: Manhattan bridge now being closed by NYPD – A car just ran over a protestor at W. Broadway and Chambers st EMS responding.

BREAKING: A car just ran over a protestor at W. Broadway and Chambers street. pic.twitter.com/LFUCv46yJu

I just watched a car runover a protester in TriBeCa. What the fuck is wrong with people?

The march down Chambers St. shut down the entire road, much like the protests did Wednesday to some of New York City’s biggest avenues.

A similar incident took place last week during protests against the Darren Wilson and Michael Brown decision in Minneapolis. A car sped through the crowd then and ran over a female protester who, it turned out, suffered only minor injuries.