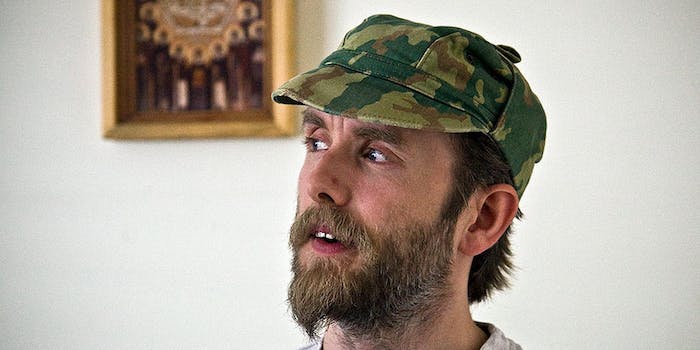 To be fair, he did burn down seven churches and stab someone to death.

EBay users attempting to sell albums by popular Norwegian metal musican Burzum have been met with sternly worded warnings instructing them that, becuase of the site’s policies, the heavy metal albums cannot be sold there.

The message seen by eBay sellers attempting to sell Burzum albums (via metalsucks.net)

The warning message states that the site’s ‘Offensive Material Policy’ bar Burzum albums from the auction site. But why is eBay stopping the sale of music?

It’s likely due to the compex history of Burzum. (His real name is Varg Vikernes.) Vikernes is one of the most notrious names in metal music. After joining the burgeoning black metal scene in the early nineties, Vikernes was embroiled in a complicated legal case where he was accused of burning down seven churches across Norway.

In 1993, Vikernes was accused of stabbing a fellow black metal musican to death. After being sentenced to 21 years in prison, Vikernes was released in 2009. But the controversy didn’t stop there. He’s since been accused of inciting neo-Nazi hatred, encouraging a wave of new church burnings, and planning terrorist attacks with guns and explosives.

EBay sellers seeking to sell Burzum’s albums have received the above warning, which suggests that the products promote violence. Metalsucks.net reports that attempts to clarify the ban with eBay’s support team via telephone resulted in the news that Burzum products have been banned on eBay since last week.

This isn’t the first time that eBay has clamped down on black metal music. In 2006, the site banned a series of metal albums (including a Burzum compilation) after it was alleged that Christian groups complained about the lyrics.

Some metal fans have expressed outrage over the ban, claiming that the site is targeting only metal performers. Notably, Charles Manson’s artistic works are still for sale on the site, as are releases produced by Phil Spector. With no news of Burzum tracks being allowed back onto the site, it seems that the albums are destined to reduce in numbers until there are none left for sale.