One person's stupidity is another's entertainment.

People are always willing to do insane things for the honor of your internet viewing time. The latest genius idea to grace Youtube comes from an old friend of ours, the TheBackYardScientist, who throws some live bullets into molten aluminum. But first we get a little demo showing us how not-dangerous bullets are when they aren’t gaining speed through a gun’s barrel.

“The cartridge went through both pieces, but overall I think that there is really nothing to worry about, that thing isn’t travelling any more faster than an airsoft gun, so as long as I wear goggles I should be okay.”

Of course, adjectives like “think” and “should” illustrate the exact amount of confidence one should have before doing something so dangerous, right?

Test one of dangerous experiment is to throw a bullet into a pot of melted pewter. Our Hawaiian-shirt-clad hero steps back an always-safe-enough 10 yards or so before chucking a bullet into the hot liquid metal. The bullet bounces off the bottom of the pot before exploding (Perhaps a little faster than an airsoft gun this time?).

Test two gets our Youtube friend closer to having molten aluminum splash all over his face. This time, the bullet remained in the pot before exploding, and sent scalding hot liquid flying into the air. 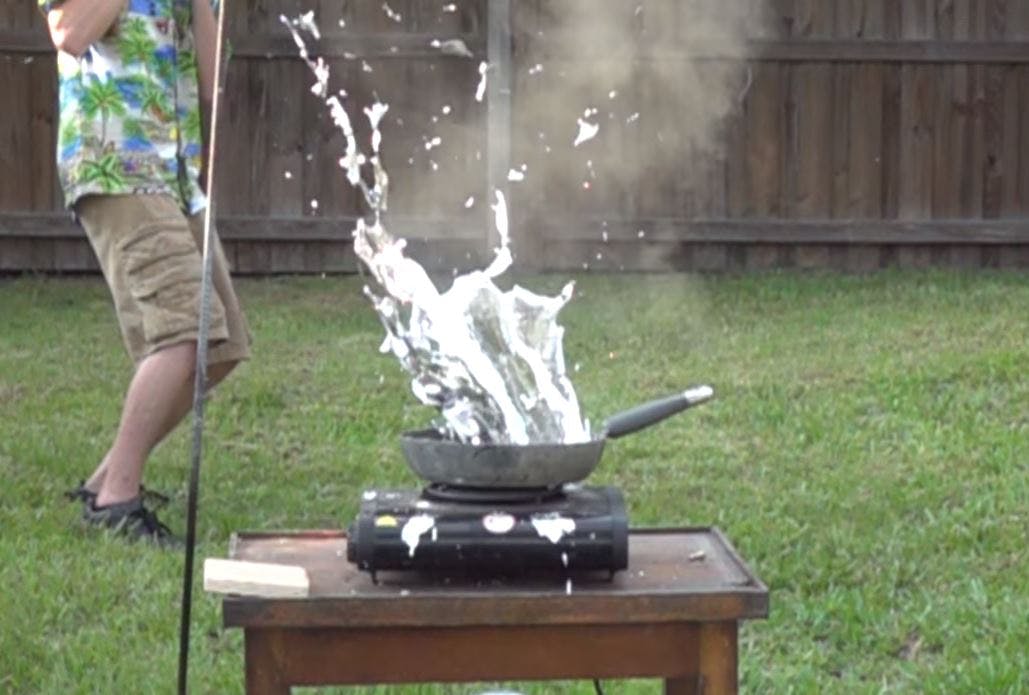 But it’s the third test Youtube viewers are really after, where a bag full of bullets is tossed into a larger pot of molten aluminum. Only a few actually land in the pot, but it is enough to send TheBackyardScientist scurrying back toward safety, and his “whole yard pretty much caught on fire.”

The video personality luckily only ended up with a little blister caused by a tiny bit of scolding aluminum that burnt right through his shirt. All in the name of science and YouTube clicks!

BONUS: What if I told you I watched ‘The Matrix’ for the first time: