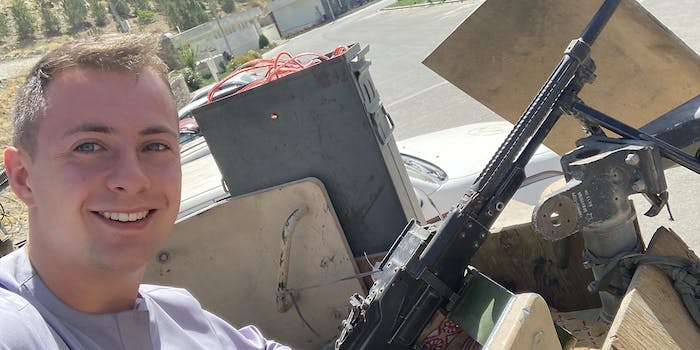 ‘If I die, It’ll be funny I think’: A student named ‘Lord Miles’ is live streaming from Afghanistan after getting ‘stuck’ (updated)

'Lord' Miles Routledge describes being stuck in Afghanistan as a 'bit of a pickle.'

Update 4:11pm CT, Aug. 11: According to a Facebook post, Miles Routledge has made it out of Afghanistan and is in Dubai.

“The happy ending: landed in Dubai thanks to the brilliant people at the British army. All safe!,” Routledge wrote in the caption to a short video.

In an earlier post, Routledge said that he’d made it out of Kabul.

“I’m fine. Got Evacuated at 4ish (it’s 2am now) with 100 or so other civilians, couldn’t message as there were cars emitting signals that would set off bombs, it blocked my airpods from connecting so I think it blocked all wifi/data. The Taliban let us go through the airport and we met many of them, very long transition period but everyone was smiling and waving at one another, some took selfies with them,” he wrote.

As the Taliban seizes control of Afghanistan amid the United States’ withdrawal, a British university student is documenting the experience of being “stuck in Kabul.”

Miles Routledge, aka Lord Miles Le-vesconte Routledge, spent the weekend posting on 4chan, Facebook, and Twitch about what he says was supposed to be a vacation to the Afghan capital. He’s remained mostly upbeat throughout an experience he claims includes a failed attempt to get out, threats, and a safe house.

“Decided to pop down to Afghanistan for a few days, never been here before,” he wrote on 4chan on Friday. “Just goofing off and soaking in the sun. Seems more peaceful than London to me.”

Many believe that it’s all an elaborate troll. To convince his skeptics, Routledge has posted a photo of a purported Aug. 13 plane ticket to Kabul, and held up his visa during a live stream. The visa shows that he entered Afghanistan on Aug. 13. The first and last name match his, although the middle is different. The stated birth date is the same day that people wished him happy birthday on Facebook last year. He’s also posted images of himself posing with weapons in desert terrain and inside an alleged safe house.

A person who claims to have corresponded with Routledge on Facebook Live has posted pictures of his “all access pass” to a hotel in Kabul, along with its name and location.

While these posts are public, the Daily Dot is not linking to or including images or information that could reveal Routledge’s precise location. Routledge did not respond to questions sent Monday morning.

The 4chan threads appear to have been deleted, but the live streams and Facebook posts remain up as of this writing. Screenshots of the 4chan posts are circulating on other platforms.

Screenshots from 4chan show Routledge claiming he traveled to Afghanistan after searching for the most dangerous countries to visit.

“Just want to reiterate my confidence: the intelligence agencies show that the capital may be taken over in 30 days; however not in a few days,” he wrote on Sunday. “…Also if I get proven wrong and die, edit a laughing soundtrack over my posts. It’ll be funny I think.”

This weekend, Routledge posted photos of his meals and downplayed the risk.

The situation took a turn on Sunday when he realized that Kabul was already being seized by the Taliban. Routledge said he walked to the airport to attempt to get a flight out. “Country in anarchy, saw a few dead in a car crash,” he wrote on Facebook.

“I’ve had a few people come up to me with knives in pockets, they show you the outline and they’re like, ‘Oh, we don’t like filthy foreigners,’ and I’m like, ‘Yeah mate, based,'” he said on Twitch.

If he does get caught, Routledge claims he hopes the Taliban will see the honorific “Lord” on his bank cards and believe that he’s valuable enough to negotiate an exchange. He’s not actually a Lord, however; he says he bought a fake certificate and talked a good game at the bank to convince them he was nobility.

Routledge later said he didn’t get a flight and was told none were available. On 4chan he said that he saw the Taliban enter the airport, but they didn’t seem to care about him.

There have been numerous casualties at the Kabul airport this weekend as desperate crowds overran it in the hopes of escaping. CBS News reports that U.S. forces killed two armed Afghans. The cause of the other deaths is not known.

Also on Sunday, Routledge said that he had made it to a safe house.

Throughout it all, Routledge has largely remained unmoved by his predicament, even glib at times. “No more flights in Kabul, I’m stuck in Afghanistan. Bit of a pickle,” he posted on 4chan. “Will I have to wage gorilla warfare across the Taliban until I reach another country?”

Routledge has repeatedly said that he isn’t afraid to die, and expressed his Christian faith.

“I just thought I’m going to be killed by the Taliban. Fair enough,” he said at one point.

Thousands have been following Routledge’s posts on various platforms. Most think he’s foolish, brave, an attention seeker, or a combination of the three.

“I salute this man’s massive balls. Fucking legendary,” said one. Others suggested that he’s lying and using photos from a prior trip to the country to fool the masses in the hopes of becoming famous. “No it’s a joke he’s probably not even in Afghanistan. This is just funny the entire thread it’s all a joke,” tweeted @bluerosefbi.

Routledge now says that he is working on getting evacuated and, even as he says he’s accepted that he might be killed, remains optimistic that he’ll make it out alive.

“Maybe I might be back tonight, maybe next week, maybe a month.”

In his most recent public Facebook post, Routledge assured people that he was “comfortable” and asked them to focus on the plight of the Afghan people. “My tour guide is currently fearing for his family and his only crime is going the extra mile and saving my life, I can never repay him and that saddens me,” he wrote. He also asked for people who have begun collecting money for him to give it to charities.

Routledge hasn’t posted in nearly 12 hours. His whereabouts and status are unknown.