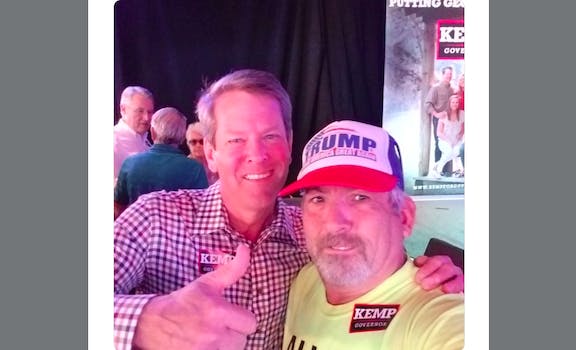 Brian Kemp posed for a photo with an anti-Muslim extremist

Brian Kemp, the Republican candidate for governor in Georgia, was photographed posing with known anti-Muslim extremist James Stachowiak during a campaign event earlier this month.

The photo, shown on the Facebook page of the Center for American-Islamic Relations (CAIR), features Kemp posing with Stachowiak, who wears a yellow t-shirt which reads, “Allah is not God, and Muhammad is not his prophet.” Stachowiak also wears a pro-Trump hat, and both sport “Kemp for Governor” stickers. According to Stachowiak’s Periscope account, the photo was taken at a campaign event at a Wild Wing Cafe in Augusta, Ga., on Oct. 5.

According to a statement from CAIR,  “Stachowiak has previously called for Muslims to be killed, threatened to shoot Black Lives Matter activists, as well as ‘women and children’ who ‘loot’ during protests against police brutality, and trespassed upon a Georgia mosque to destroy a copy of the Quran while armed with a weapon.”

Stachowiak is known in Georgia for a 2016 incident in which he applied for a permit to hold an anti-Islam rally at the Georgia statehouse and was denied. Stachowiak then held event, which was intended to “raise public awareness to what we perceive as a threat to our nation from Islamic immigration and refugees,” anyway. Stachowiak also encouraged attendees to carry weapons to the event.

According to the Atlanta Journal-Constitution, Stachowiak brought two firearms to the Augusta Mall in 2015, allegedly to protect nearby military recruiting offices after a Kuwait-born American citizen opened fire on military installations in Chattanooga, Tenn., killing five.

Stachowiak’s Periscope channel, @JohnnyInfidel, shows Stachowiak dressed as James Bond, posing with a pistol. “America’s enemies will not be stopped with acts of appeasement only with a show of force and a willingness to use it. We cannot coexist with Islam,” reads the bio.

Kemp is running against Stacey Abrams in the Georgia governor’s race and currently serves as Georgia Secretary of State. He has previously come under fire for potentially disenfranchising tens of thousands of Black voters in Georgia.

Neither Stachowiak nor Kemp’s campaign returned requests for comment by press time.