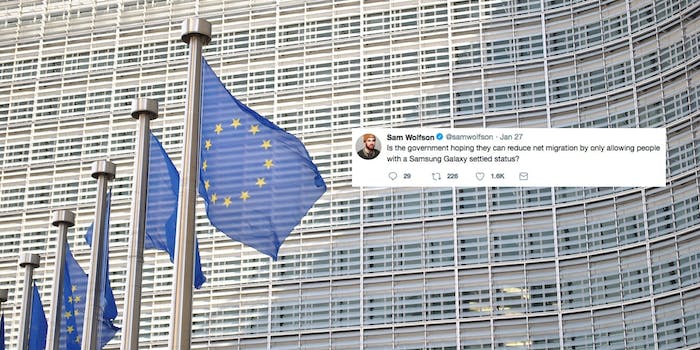 The British government is under fire because of a faulty app it’s requiring European citizens to use when applying for a new settlement scheme ahead of the country’s impending exit from the European Union set for the end of March.

In guidelines issued last month, the government explained that all E.U. citizens living the United Kingdom and who wish to stay after Brexit must register by December 2020. Those guidelines explain that this could be done using a dedicated app or by visiting one of 13 dedicated centers across the country.

Users who could download the app are already complaining about bugs and how slow it is, and it turns out that the app is only available to those with an Android device.

Brits on Twitter shredded the new app to pieces after a thread by freelance journalist Sam Wolfson went viral.

Is the government hoping they can reduce net migration by only allowing people with a Samsung Galaxy settled status?

E.U. citizens who only own an iPad or iPhone will need to find a friend with an Android or make their way to a dedicated center to register, which could be hours away and where they’ll be charged £14 ($18.50) to use the government’s devices.

We already mentioned that there are only 13 sites serving the whole nation, didn’t we? Scotland’s only center is located in Edinburgh, and England’s situation isn’t much better.

The app, it turns out, is experiencing lots of technical issues as it fails to recognize passports and identification documentation.

Have just spent the whole day trying to apply for the EU settlement scheme, but to no avail. Doesn’t want to recognise passport. Next step is to send documents away for indefinite time, the third time we’ve had to do this in 3 years. No travelling in the meantime. 1/

Mostly, though, Twitter users found the dysfunction of the app an appropriate and amusing reflection on how Brexit is going in general.

Anyone in Leicester available to lend their Android 6.0 to @HandsOffKib?#Leicester#SettledStatus #SettledStatusBorrowMyAndroid#FBPE#the5million
@HandsOffKib – hope OK to RT. Some peeps using hashtag to link up and avoid long trips to one of the centres and £14 charge. https://t.co/Y5Y3ZzgXNE

While this is super kind, it’s an identity thief’s dream. One user outlined a handy checklist to help protect everyone using a stranger’s phone to scan and upload their ID documents.

The Daily Dot has reached out to the British Home Office for comment.