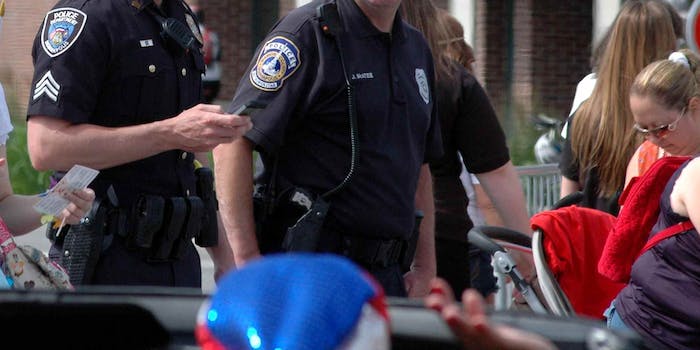 Photo via Steve Baker/Flickr (CC BY 2.0)

The T-shirts are intended to "bring people together." It's not working.

The last words of Eric Garner, “I can’t breathe,” have become a rallying cry against police brutality and perceived institutional injustices. On Jul 17. the 42-year-old New Yorker died after being placed in an illegal chokehold by an NYPD officer, and the grand jury decision not to indict the officer for his part in the death sparked nationwide protests. “I can’t breathe” became a protest chant, an expression of frustration, and a slogan to be worn across T-shirts—with numerous high-profile athletes including LeBron James expressing their solidarity with shirts displaying the phrase.

An Indiana cop and business owner has now produced his own “absolutely necessary” line of rival T-Shirts, displaying the slogan “Breathe easy—don’t break the law.”

Jason Barthel has told WSBT that the shirt is “selling pretty quickly,” with more than 100 orders placed by Monday.

“We are not here to do anything negative to the public. We’re here to protect the public and we want you to breathe easy knowing that the police are here to be with you and for you and protect you,” Barthel told the news channel. He wants to “bring people together not tear them apart,” he adds.

There’s been an immediate backlash to the T-shirt, with many taking to the Facebook page of the South Bend Uniform Co.—Barthel’s company—to level criticism at the choice of slogan.

“Thanks for showing the community that it’s okay for the police to kill a man for selling single cigarettes,” one man writes. “You guys are true assholes!”

“You can support the police force without supporting brutality,” another woman has commented. “They are NOT one and the same. The maker of this shirt doesn’t seem to get that.”

A statement issued by South Bend Uniform Co. says they just want people to know that “police are there for you,” and that the shirt is “by no means a slam on Eric Garner or his family.”

Even if it does make a joke out of the last words Garner gasped as he lay dying.