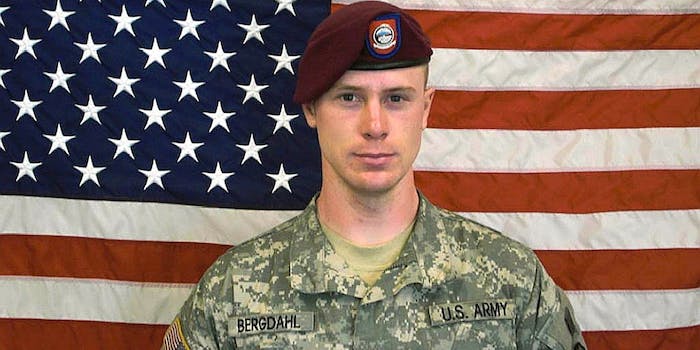 Sgt. Bowe Bergdhal, who spent five years as a POW, is being called a "deserter."

The brief honeymoon over the release of United States Army Sergeant Bowe Bergdahl, the last American prisoner of war in the Afghanistan conflict, seems to be over.

The decision by President Obama to negotiate Bergdahl’s freedom in return for five Guantanamo Bay detainees has already attracted widespread criticism from the right. But it is the background of the wayward sergeant himself that is now coming to light, as many of his former comrades in arms disown him as a “deserter.”

According to CNN, members of Bergdahl’s platoon lament his “selfish act” that cost the lives of at least six other U.S. soldiers and insist that he must face a trial for desertion under the US Code of Military Justice. Sgt. Matt Vierkant, one of those decrying Bergdahl, told CNN, “I was pissed off then, and I am even more so now with everything going on.”

Vierkant is not alone. A petition on the White House website started on Saturday calls for President Obama to “Punish Bowe Bergdahl for being AWOL / Desertion during Operation Enduring Freedom.” It has already gained more than 5,700 signatures, at the time of this writing. A Facebook group with a similar message also exists, and was apparently set up by one of Bergdahl’s former squad leaders.

These pages online are likely ways that servicemen who served with Bergdahl are finding to get around the non-disclosure agreements they were made to sign by the Department of Defense that have hamstrung their ability to talk to the traditional media.

Now is not the first time critics have questioned Bergdahl. In 2012 a sweeping Rolling Stone feature revealed emails in which Bergdahl stated that “life is way too short to care for the damnation of others, as well as to spend it helping fools with their ideas that are wrong. I have seen their ideas and I am ashamed to even be American.”

Ultimately, it is unlikely that any punishment will be given to Bergdahl, who is set to be promoted to Staff Sergeant later this month. He has spent the vast majority of his military service in Taliban captivity.

Speaking to CNN, a senior DoD official seemed to confirm that Bergdhal will remain a free man, saying, “Five years is enough.”