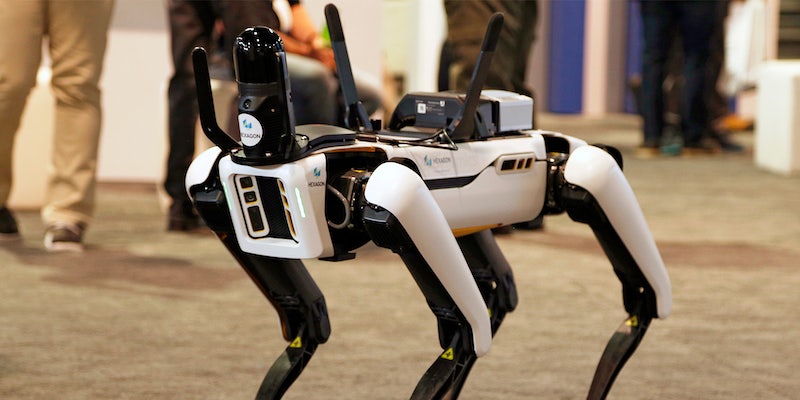 Boston Dynamics—along with a group of robotics firms—penned an open letter this morning condemning the weaponization of “general purpose” robots, reaffirming the company’s already existing stance against weaponization of its robot dog.

From Boston Dynamics’ perspective, the letter was nothing new. The company has repeatedly stated that its policy expressly prohibits the weaponization of its robots, including the dog-like Spot robots that have repeatedly gone viral in recent years.

The letter makes clear what appears to be a long-standing policy within the company: don’t shoot people with our robots. On the company’s website now, Boston Dynamics expressly says they will “not sell to nor partner with those who wish to use our robots as weapons or autonomous targeting systems” and that “any use of our robots to harm or intimidate people or animals is strictly prohibited.”

The letter, published on Thursday morning, made those values clearer and aims to put Boston Dynamics squarely in objection to other robot makers whose mission seems to be to arm robots.

Ghost Robotics, which debuted a gun-toting robot dog during the U.S. Army’s annual conference last year, seems to have no problem arming its robots. Ghost Robotics told TechCrunch they “don’t make the payloads” and they’re “not going to dictate to our government customers how they use the robots.”

Ghost continued that they “only sell to U.S. and allied governments” and that while they get a lot of inquiries from Russia and China, they don’t ship there.

The letter, which seems to be in direct contrast with Ghost Robotics, tries to put the six robotics firms on moral high ground.

“We believe that adding weapons to robots that are remotely or autonomously operated, widely available to the public, and capable of navigating to previously inaccessible locations where people live and work, raises new risks of harm and serious ethical issues,” the letter stated. “Weaponized applications of these newly-capable robots will also harm public trust in the technology in ways that damage the tremendous benefits they will bring to society. For these reasons, we do not support the weaponization of our advanced-mobility general-purpose robots.”

The letter seems to call out Ghost Robotics, saying that the firms “feel renewed urgency in light of the increasing public concern in recent months caused by a small number of people who have visibly publicized their makeshift efforts to weaponize commercially available robots.”

The internet got another glimpse of how dangerous a weaponized Spot robot could be last year when artist collective MSCHF strapped a paintball gun to the Boston Dynamics creation and let the internet control it. Boston Dynamics was furious, calling the whole thing a “spectacle” and saying they’d been duped about MSCHF’s intentions for the robot.

In a statement to the Daily Dot, a Boston Dynamics spokesperson said the company has held an anti-weaponization policy since Spot was launched commercially in 2020.

The companies pledged to never arm their robots and explore methods to mitigate or reduce the risk of their units being modified to fit weapons.

“We are convinced that the benefits for humanity of these technologies strongly outweigh the risk of misuse, and we are excited about a bright future in which humans and robots work side by side to tackle some of the world’s challenges,” the letter said.