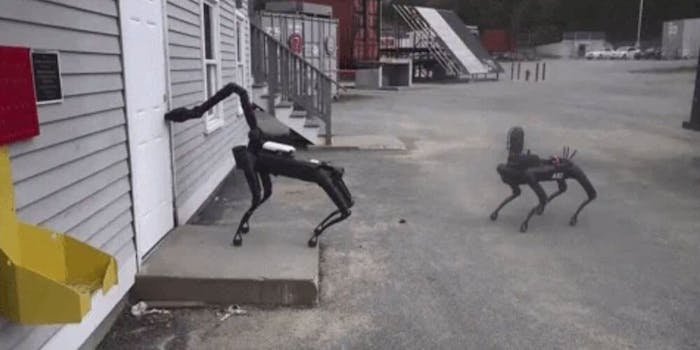 'Spot' the robot dog was loaned to the department by robotics company Boston Dynamics.

Police in Massachusetts secretly tested a robotic dog for three months this year, documents obtained by the ACLU show.

While it remains unknown how exactly the robot was used, Massachusetts State Police confirmed that officers not only used Spot in testing but in two actual incidents as well.

Although the use of robots by police isn’t new—Massachusetts’ bomb squad has 18 different robotic platforms at its disposal—the department is the first in the country to use Spot.

The robot has repeatedly made headlines for doing everything from innocently dancing to Bruno Mars to creepily opening doors with its robotic arm.

“Robot technology is a valuable tool for law enforcement because of its ability to provide situational awareness of potentially dangerous environments,” Procopio said.

Civil liberties advocates have raised concerns over the potential of such robots to become weaponized in the near future.

Boston Dynamics vice president for business development Michael Perry said the robots are intended to be used in a manner that protects humans.

“Right now, our primary interest is sending the robot into situations where you want to collect information in an environment where it’s too dangerous to send a person, but not actually physically interacting with the space,” Perry said.

In fact, Boston Dynamics’ lease agreement includes a clause barring Spot from being used in any way that could hurt or intimidate people.

“Part of our early evaluation process with customers is making sure that we’re on the same page for the usage of the robot,” Perry added. “So upfront, we’re very clear with our customers that we don’t want the robot being used in a way that can physically harm somebody.”

Despite reassurances, the ACLU of Massachusetts is calling for both the police to adopt a policy and the state to pass laws and regulations ensuring weaponized robots don’t become a reality.

“We really need some law and some regulation to establish a floor of protection to ensure that these systems can’t be misused or abused in the government’s hands,” the ACLU’s Kade Crockford said. “And no, a terms of service agreement is just insufficient.”

Boston Dynamics announced in September that mass production of Spot had begun, making the robot available to select early adopters.