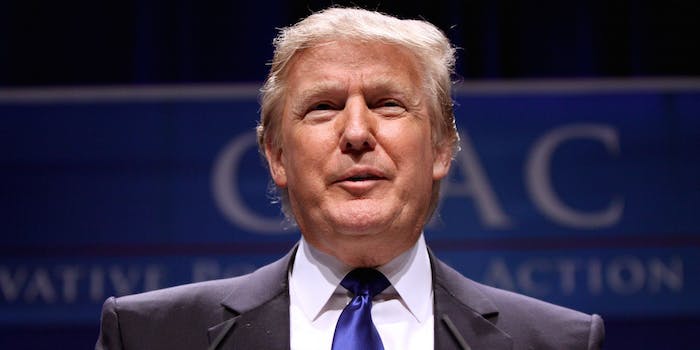 But Trump's reaction to the attack is almost worse

Great leaders inspire passion. But in the case of Donald Trump, that’s proving to be a dangerous thing indeed.

Police said two Boston brothers viciously beat a homeless man because he was Hispanic, the Boston Globe reports. One of the men was allegedly inspired by the anti-immigrant rhetoric of Trump, who famously called Mexican immigrants “rapists” during his presidential campaign announcement in June.

The 58-year-old beaten man was found laying on the ground, bloodied, and covered in urine, police said. The attack reportedly occurred outside the Dorchester train station in Boston.

“I will say that people who are following me are very passionate. They love this country and they want this country to be great again.”

Police said the brothers, Scott Leader, 30, and Steve Leader, 38, awoke the man by urinating on his face. “Next thing … he was getting hit in the face and head,” according to the State Police report cited by the Globe. “He remembers being punched several times and hit with the metal pole.”

“Donald Trump was right, all these illegals need to be deported,” Scott Leader allegedly told police. Leader previously served a year in prison for a hate-crime attack on a Moroccan man days after the Sept. 11, 2001, terrorist attacks, according to court documents.

When the Globe informed Trump of the attack, the current 2016 GOP presidential frontrunner admitted that his supporters are “passionate.”

“[I]t would be a shame,” Trump said of the attack. “I will say that people who are following me are very passionate. They love this country, and they want this country to be great again. They are passionate.”

Trump has made immigration a centerpiece of his presidential campaign. Since announcing his candidacy, he has refused to back down from his anti-immigrant rhetoric despite public outcry and media backlash.