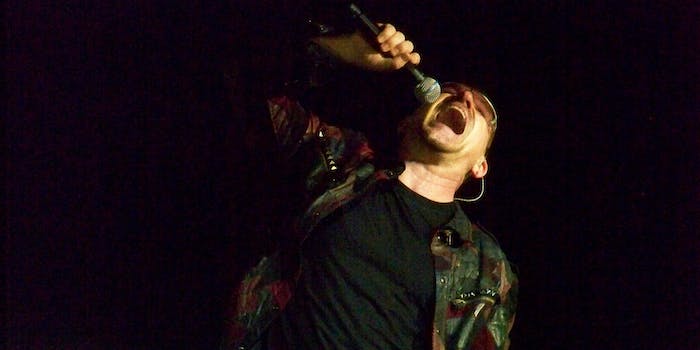 Bono apologizes for sending you U2’s newest album without asking

"There's a lot of noise out there. I guess we got a little noisy ourselves to get through it."

Apple may change their iPhones, iPods and iPads on what seems like a weekly basis, but the one thing that remains consistent is the company’s longstanding love affair with U2. From commercials to limited-edition iPods, Apple has exposed Bono’s sunglasses and The Edge’s beanie to a new generation of music lovers. But on September 9th, the company went too far.

As part of their iPhone announcement, the company provided the band’s latest album “Songs of Innocence” free of charge to 500 million iTunes users. With the company pushing the album directly to users’ iTunes accounts, some copies downloaded automatically, and a great many music lovers were suddenly saddled with an album they weren’t looking for.

The free “gift” was so offensive to some that they beseeched the company for a step-by-step guide on how to remove the album, and Apple obliged. But for those still smarting from the ordeal, Bono has an apology for you. In a video interview with Facebook on Tuesday, the band answered questions from fans, one of which concerned the album release debacle.

Oops. Um. I’m sorry about that. I had this beautiful idea and we got carried away with ourselves. Artists are prone to that kind of thing. Drop of megalomania, touch of generosity, dash of self-promotion, and deep fear that these songs that we poured our life into over the last few years might not be heard. There’s a lot of noise out there. I guess we got a little noisy ourselves to get through it.

While we can certainly expect to hear a lot more of U2’s music in the future thanks to its $100 million deal with Apple, it’s unlikely the company will be giving away the band’s music again anytime soon. With or without you, the band will carry on.