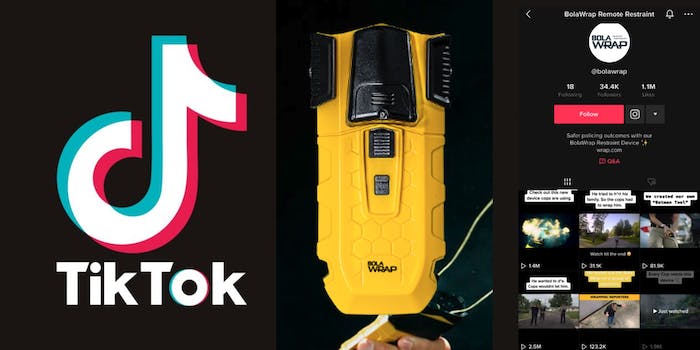 The account had more than 48,000 followers and 1.5 million likes. Videos ranged from tens of thousands to millions of views.

The BolaWrap made its TikTok debut earlier this year, but now its account is deleted.

An account associated with the brand was using the social media platform to spread information about its high-tech lasso, which is used by police to restrain individuals undergoing mental health crises.

The device has been controversial, with some lauding it as a way to make policing safer and others arguing that force shouldn’t be used on individuals with mental illnesses at all.

After the Daily Dot reached out to WRAP, the makers of the device, about the account, it was removed from TikTok.

“The TikTok videos do not reflect the seriousness with which the company takes the challenges facing our communities, which are the same challenges we hope to play a role in helping to solve,” the company said in a statement to the Daily Dot.

“We apologize for any insensitivity displayed,” the statement said, “and have taken the necessary steps to ensure that our social media channels are not used in this manner moving forward.”

The account, called @bolawrap, featured clips of demos and actual footage to show users how the device works. The Daily Dot previously reported that WRAP offered police departments free BolaWraps after they submitted body camera footage of deployments. Those videos were then used by the company for its marketing.

The account had more than 48,000 followers and 1.5 million likes. Videos ranged from tens of thousands to millions of views.

On the TikTok videos, reviews of the device were mixed.

Thousands of commenters weighed in on a video that shows a real-life deployment of the BolaWrap on an uncooperative individual, captioned, “Every cop needs this device.”

Some posted their support for the devices.

“Yes every cop should have these,” wrote @mrgreytape.

“Cops could use pillows and people would still find a way to complain about it being too much,” wrote @adamjustvibing.

But others criticized their use.

“They don’t need devices, they need to learn how to subdue violent subjects and [deescalate nonviolent] ones” wrote @mediumboy.

“They definitely do not, we are not farm animals,” wrote @rural_rice.

That particular video had more than 2 million views.