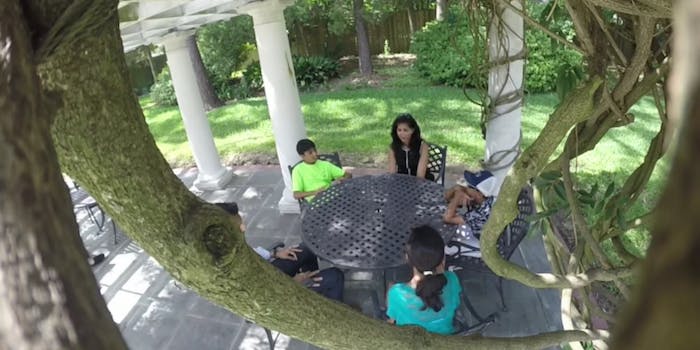 'To Catch a President.'

There are so many Republicans running for president in 2016 that new candidate announcements already feel boring. But Louisiana Gov. Bobby Jindal (R) broke through the static on Wednesday with the most unique—and profoundly creepy—campaign launch we’ve seen so far.

This clip (one of several that accompanied Jindal’s announcement) employs a familiar viral trope: It’s a hidden-camera video that shows the governor telling his family that he’s made his decision to run for the highest office in the land, and it looks like an outtake from To Catch a Predator.

The audio is decidedly crummy—Jindal’s words fade in and out—and the candidate himself is mostly obscured behind a tree branch. (You know, reality TV production assistants aren’t that expensive.) But you can clearly see Jindal’s wife, Supriya Jolly, and his three kids as he shares the news.

Jindal’s family doesn’t react with anything that could reasonably be called “excitement,” or “surpsise,” or “interest,” but the clip does include the requisite groveling to Iowa, the all-important early primary state.

“Maybe you’ll get a chance, if you behave, to go back to Iowa,” Jindal tells his children, somewhat threateningly. “Would you like that?”

“You like Iowa, don’t you?” Jolly then asks one of her sons. The young boy nods vigorously but is likely dreading the onslaught of corn dogs.

All in all, it’s a heartwarming moment. And maybe, just maybe, we’ll look back on this on January 20, 2017, as our first glimpse at America’s First Family. But also, no, definitely not, sorry. At least they’re getting a puppy?