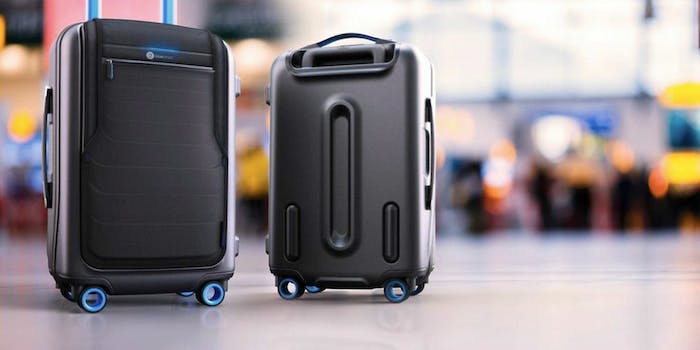 If you can judge how good an idea is by how fast its Indiegogo campaign gets funded, the Bluesmart connected carry-on bag might be the best idea humanity has ever had. According to the company, its modest $50,000 goal was met in just two hours and one minute of its launch earlier today, and it has since nearly doubled that amount—and it still has 36 days left in its campaign.

$235 (or $195 to $215 if you were one of the first 500 people to get in on the Bluesmart action) gets you a piece of carry-on luggage capable of syncing with your smartphone, locking itself if it ever leaves your side, recharging your phone via a built-in battery reservoir, and telling you where it is if it ever accidentally ends up at a different airport than you intended. It also has a digital scale built in so you know if you’ll have to check it or not.

The Bluesmart app—which is as important as the luggage itself—keeps track of your various trips and charts trends over time and will serve as a hub for all the data the bag spits out, and also allows you to control the bag’s digital lock remotely. If you’re worried about a random TSA bag check leading to a busted Bluesmart bag, the company notes that the lock uses Travel Sentry security, so it can be unlocked by security personnel if needed.

At over $200 for a carry-on size piece of luggage, it’s just a bit more expensive than its less capable peers, but if you’re a frequent flyer there’s lots to be excited about here. What isn’t terribly exciting is that the bags won’t see mass production for quite awhile, as the pre-orders currently being taken won’t actually be shipped until August of 2015.