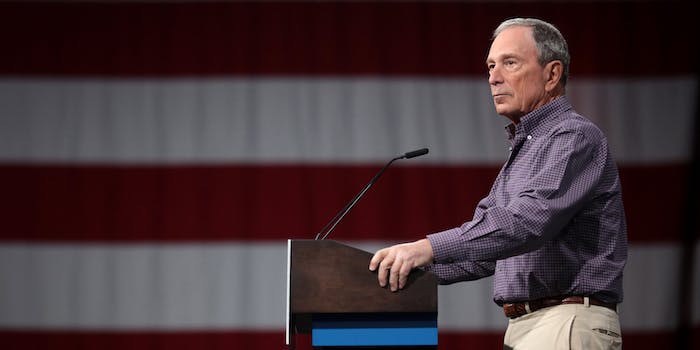 Was Bloomberg owned harder on the debate stage or by Twitter?

People were quick to joke about his performance in the Nevada debate.

Billionaire 2020 Democratic presidential hopeful Michael Bloomberg made the debate stage for the first time on Wednesday—and his rivals made quick work of him.

Nearly all of the Democrats seeking the party’s nomination for president wasted no time in attacking Bloomberg, who has surged in polls amid an advertising blitz ahead of Super Tuesday next month.

Sen. Elizabeth Warren (D-Mass.) and Sen. Bernie Sanders (I-Vt.) both dug in against Bloomberg, who has effectively become a foil for the brand of politics they both support.

Meanwhile, other 2020 candidates also made sure to take shots at Bloomberg.

Bloomberg was savaged over his wealth, his support of stop-and-frisk, and accusations of sexual harassment.

Overall, Bloomberg’s performance left many people wondering if his campaign had what it takes—besides funding—to continue.

And the jokes came quick.

On Thursday, #FinishHim was trending on Twitter, with most of the tweets referring to Bloomberg’s debate performance.

Even President Donald Trump couldn’t help but comment on Bloomberg’s debate, calling his showing “perhaps the worst in the history of the debates.”

“Mini Mike Bloomberg’s debate performance tonight was perhaps the worst in the history of debates, and there have been some really bad ones. He was stumbling, bumbling and grossly incompetent. If this doesn’t knock him out of the race, nothing will. Not so easy to do what I did!” the president tweeted early Thursday morning.