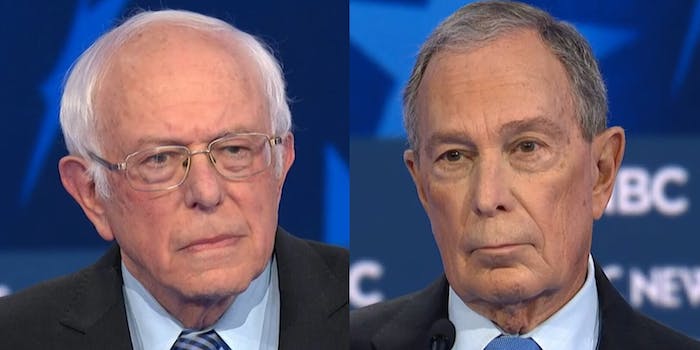 Sanders and Bloomberg have become foils in the 2020 primary battle.

Sen. Bernie Sanders (I-Vt.) has tweeted in the past that billionaires should not exist—and on Wednesday night during the Nevada debate, he railed against them as a billionaire 2020 rival was standing near him.

The debate moderators asked about Sanders tweet from September last year where he said: “billionaires should not exist.” Eventually, Sanders elaborated on his stance as he stood just feet away from Michael Bloomberg.

“We have a grotesque and immoral distribution of wealth and income,” Sanders said. “Mike Bloomberg owns more wealth than the bottom 125 million Americans. That’s wrong. That’s immoral. That should not be the case when we have half a million people sleeping out on the street, when we have kids who can’t afford to go to college, when we have 45 million people dealing with student debt. We have enormous problems facing this country. We cannot continue seeing the situation where in the last three years billionaires in this country saw an $850 billion increase in their wealth. Congratulations, Mr. Bloomberg. But the average American last year saw less than a one percent increase in his or her income. That’s wrong.”

Bloomberg later defended himself and his wealth, highlighting his philanthropic endeavors.

Sanders and Bloomberg have become foils of one another in the 2020 Democratic nomination process and got into a Twitter spat earlier this week.

Wednesday’s debate was the first time the two 2020 hopefuls we able to square off against one another.

Meanwhile, Bloomberg has surged in polls in recent weeks amid a blitz of advertising as he tries to build support before he appears on the ballot during Super Tuesday next month.