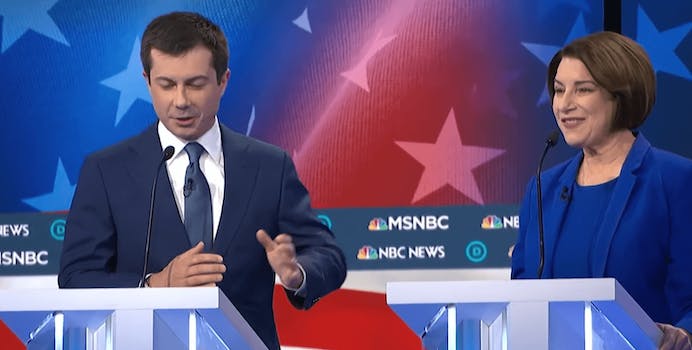 Buttigieg, Klobuchar come together to laugh at Bloomberg

The billionaire was discussing his tax returns amid questions over his immense wealth.

The two have spared fiercely in recent debates, but that was shoved aside for a moment of levity.

It came as former New York Mayor Mike Bloomberg attempted to answer questions over when he intended to release his tax returns.

As the billionaire touted what he claimed was a history of transparency, as well as noting how long it would take to release the “thousands” of pages of his taxes, Klobuchar and Buttigieg were seen laughing hysterically.

The incident delighted Twitter users, who all seemingly described the moment as wholesome.

“Pete and Amy laughing while Bloomberg speaks is giving me life,” @BradyJa44762343 said.

Even those who were openly opposed to Klobuchar couldn’t help but enjoy the footage.

“Why are Pete and Amy laughing in unison at Bloomberg?” @_StephOnSports said. “Adversaries can still laugh together. I’m still not a fan of hers.”

Some suggested that the billionaire might have been better off just staying out of the debate altogether.

“Bloomberg would have done better tonight by not qualifying for this debate,” @DavidShuster added.

Klobuchar and Buttigieg weren’t the only ones laughing though. At numerous times throughout the debate, the audience laughed at Bloomberg as well.

The fleeting kinship between Klobuchar and Buttigieg was arguably the most uplifting moment of the night. Most of the debate was filled with savage takedowns and brutal clashes between the candidates, all vying to earn the Democratic nomination and take the place of President Donald Trump.

Klobuchar and Buttigieg later had their own spat, when he challenged her for not knowing the name of Mexico’s president, a gaffe of hers that went viral over the weekend.