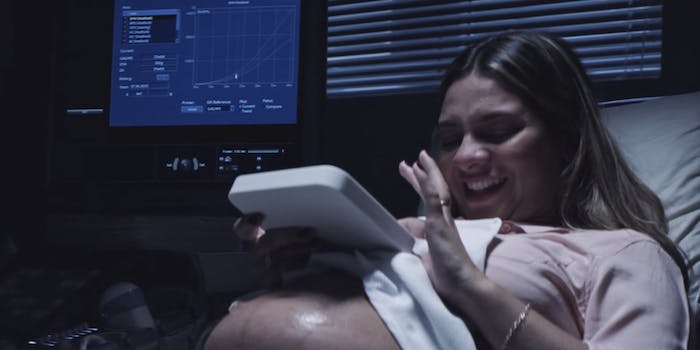 With 3D printing, this blind mom got a first glimpse of her unborn son

This will make you tear up.

Seeing a child’s face in the womb for the first time is one of a pregnant woman’s most treasured moments. But for 30-year-old Brazilian mother Tatiana Guerra, that moment wouldn’t have been possible without the help of 3D printing.

Guerra is blind, and lost her sight at age 17. She’s now expecting a son, Murilo, and at 20-weeks pregnant she went to visit her doctor for an ultrasound. She had no idea doctor had access to a 3D printer, and would provide her with a tactile rendering of her unborn son.

The heartwarming video was produced by diaper company Huggies, and although it’s clearly a marketing campaign for the product, you can’t help but let it tug at your heartstrings.

3D printing has enabled people to produce prosthetic limbs to help people walk and hug again, and print human tissue to use in medical implants. As the technology is adopted more broadly, chances are we’ll see even more stories like Guerra’s—3D printing is making otherwise impossible or expensive products accessible to the masses.