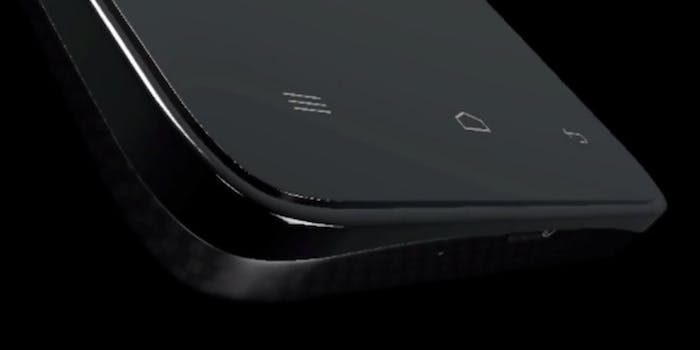 This encrypted smartphone is designed to protect your privacy

"Technology was supposed to make our lives better, instead we have lost our privacy."

With smartphones in the hands or pockets of billions of people across the world, there is no denying that these devices have become one of the most vital surveillance assets in existence. Everything from geo-tagged photos to text messages can be data mined by business and siphoned off by government crypto-spies. Enter the Blackphone, the first encrypted, privacy-centric smartphone.

“The time has come… data and humans have become one,” states a narrator in a video announcing Blackphone. “Technology was supposed to make our lives better, instead we have lost our privacy. We have become enslaved. Now it is time for a change.”

Developed and designed by the Silent Circle and Geeksphone teams, Blackphone is being billed as “the world’s first smartphone to put privacy and control ahead of everything else.” Silent Circle cofounder, Phil Zimmerman, a cypherpunk legend who developed PGP, is at the heart of the global team. He and his fellow Blackphone developers are putting their smartphone users ahead of mobile service providers and advertisers in an attempt to reshape “the landscape of personal communications.” A lofty and difficult goal, but one firmly in line with the post-Snowden privacy zeitgeist.

If anyone but Zimmerman and Silent Circle launched the project, one might suspect Blackphone of being little more than a product of bandwagoneering. A means of making a quick buck off of anti-surveillance sentiment, but without the privacy bona fides to back it up. The Blackphone team seems to be making a play for those smartphone users who loved Blackberry’s privacy and security features, but have nowhere left to turn for privacy. And with their current brain trust, Blackphone has the potential to slide into Blackberry’s vaunted privacy role, giving users the control they increasingly desire. So, how does it work?

According to the Blackphone website, the phone runs on PrivatOS (a version of Android). Right out of the gate it is unlocked and works with any GSM carrier. Monetization of data is not the revenue model here. Instead, users pay for a secure, high-end smartphone. Accordingly, users will be able to exchange secure texts, send and receive secure phone calls, securely exchange and store files, engage in secure video chat sessions, browse privately, and anonymize all Blackphone activity through a VPN (Virtual Private Network).

The inclusion of a VPN anonymizer alone is a great feature that just isn’t available on any current smartphone’s factory settings. In short, users will be able to cloak their identity through encryption and proxy servers, giving users the opportunity to give the digital middle finger to government and advertisers. That said, probably won’t take long for government crypto-spies to launching efforts to hack the phone. So, Blackphone will have to be constantly updated to keep the NSA and others out.