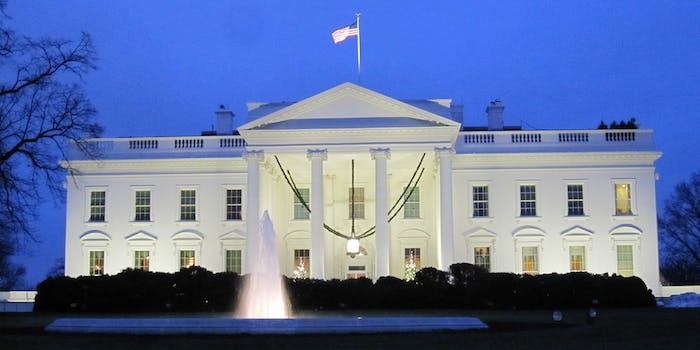 As of publication, the petition has garnered over 140,000 signatures.

The White House denied the request of an online petition asking the federal government to formally label the Black Lives Matter movement as a terrorist organization.

As pointed out by CBS News, the White House was forced to acknowledge the petition because it garnered more than 100,000 signatures.

“Terrorism is defined as ‘the use of violence and intimidation in pursuit of political aims,'” read the “We The People” petition, which was created on July 6. “This definition is the same definition used to declare ISIS and other groups, as terrorist organizations.”

The petition continued: “Black Lives Matter has earned this title due to its actions in Ferguson, Baltimore, and even at a Bernie Sanders rally, as well as all over the United States and Canada.”

However, in its response, the “We the People” team said neither the White House nor the U.S. government designate a list of domestic terror organizations.

In addressing the request of the petition, the White House recognized the fatal shootings of both Alton Sterling and Philando Castile. The response also quoted President Barack Obama‘s speech following the death of the two men.

“I know that there are some who have criticized even the phrase ‘black lives matter,’ as if the notion is, is that other lives don’t matter. And so you get ‘all lives matter’ or ‘blue lives matter.’ I understand the point they’re trying to make,” Obama said. “I think it’s important for us to also understand that the phrase ‘black lives matter’ simply refers to the notion that there’s a specific vulnerability for African Americans that needs to be addressed. It’s not meant to suggest that other lives don’t matter. It’s to suggest that other folks aren’t experiencing this particular vulnerability.”

The White House also acknowledged the deaths of the five law enforcement officers who were killed at a peaceful Black Lives Matter demonstration in Dallas on July 7.

“With an open heart,” the president said, “those protesting for change will guard against reckless language going forward, look at the model set by the five officers we mourn today, acknowledge the progress brought about by the sincere efforts of police departments like this one in Dallas, and embark on the hard but necessary work of negotiation, the pursuit of reconciliation.”