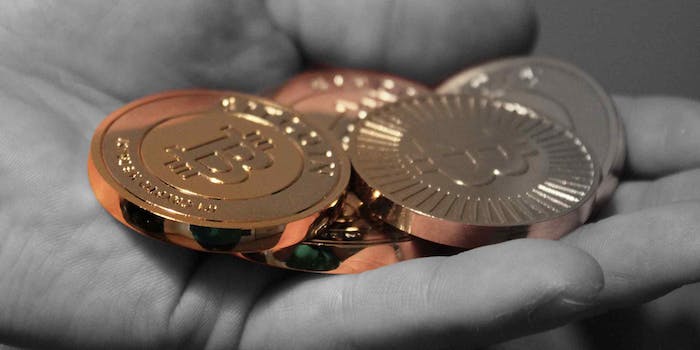 On Wednesday, police arrested Blake Benthall and charged the San Francisco resident with running Silk Road 2.0—the world’s highest-profile online black market for illegal narcotics. On Thursday, law enforcement officials announced the arrest and Silk Road, along with a handful of other prominent Dark Net black markets like Hydra and Cloud9, went down.

Over the ensuing hours, something very interesting happened. The price of Bitcoin steadfastly refused to tank. In fact, it actually jumped around the time news of Silk Road 2.0’s closure started circulating. The criminal complaint against the 26-year-old Benthall alleged that the Houston native built a multimillion dollar empire facilitating the trade of illegal narcotics. Practically all of those transactions took place using the virtual currency Bitcoin.

Benthall apparently even used $70,000 worth of Bitcoin for the downpayment on a Tesla Model S (because of course he did).

The closure of the Silk Road wasn’t the only seemingly bad news for Bitcoin that made the rounds on Thursday. Department of Justice officials announced that Texas resident Trendon Shavers was being charged with running a multimillion dollar Bitcoin ponzi scheme, and law enforcement in Ireland busted a Dublin-based drug smuggling ring that did much of its business using the cryptocurrency.

Despite this trio of setbacks, the price of Bitcoin spent most of the day climbing. The behavior of Bitcoin markets in reaction to the shuttering of the Silk Road 2.0 stands in stark contrast to how those markets reacted when its predecessor shut its digital doors just over one year ago.

What accounts for the drastic difference in the market’s reaction to the closure of the Silk Road 2.0, a site that was started soon after Ulbricht’s arrest and was based off code used for the Silk Road?

One possibility is that the ecosystem of online drug marketplaces is significantly more diverse than than it was a year ago. When the original Silk Road went down, it was the biggest game in town by a wide margin. However, over the ensuing months, dozens of other markets have arisen to the fill the vacuum—leading to the entire economy to roughly double the number of products for sale.

According to an analysis by the Washington Post, the sites shuttered by law enforcement authorities this week accounted for less than one-third of all Dark Net black market commerce. As such, the closure Silk Road 2.0 and its associated sites didn’t suddenly make anyone’s bitcoins less valuable as a way to buy illegal drugs online; switching over to another site of equal quality can easily be accomplished with a few mouse clicks.

If anything, the seizure of the coins held by Silk Road 2.0 had the effect of taking that currency out of circulation, at least temporarily, which would make everyone else’s coins just that much more of a scarce resource.

Another explanation is that, in many ways, the Bitcoin economy has outgrown its dependance on on illegal activity. For a good while now, Bitcoin evangelists have been preaching about how the public needs to expand its conception of what Bitcoin actually is. Once they do that, they’ll see that the virtual currency is much more than just a mechanism for people to transact online without necessarily revealing their real-world identities. At its core, they argue, Bitcoin is a way to transact securely without having to pay a third-party to facilitate the transfer of funds.

“The market size of radical libertarians is pretty small,” explained Jeremy Liew, managing director of the Silicon Valley venture capital firm Lightspeed Venture Partners, tracing the currency’s expanding circle of adoption at last year’s SXSW Interactive conference. “People who want to conduct illicit business is bigger, but it’s still not enormous. The market size of everyone who could use it as a payment mechanism is virtually everyone who uses money.”

Liew estimated that at least half of all Bitcoin transactions involve online gambling. While online gambling is illegal in the United States, that type of activity isn’t related to what was going on at black market sites like Silk Road 2.0.

Bitcoin’s refusal to tank post-Silk Road 2.0 is good news for the currnecy’s boosters, but the bigger picture is somewhat less rosy. From an all-time high of over $1,200 late last year, the price of Bitcoin has since dropped to around $350.