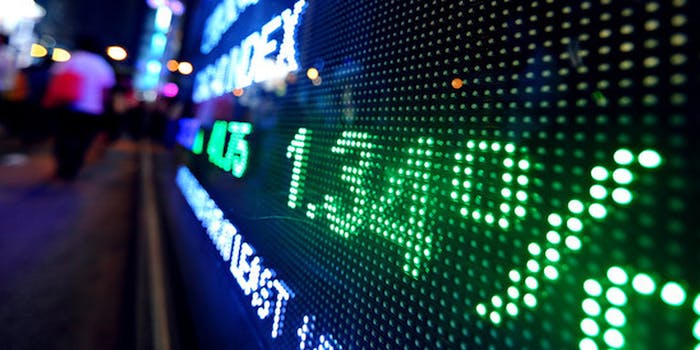 How Bitcoin could boost prediction markets

Blocked in the U.S., predictions markets could use the digital cryptocurrency as a legal workaround.

Bitcoin has been credited with reviving online gambling in the United States—an industry that had been shuttered for several years. Now, the virtual currency may help revive a similar, controversial online institution.

Researchers at Princeton University are seeking to use Bitcoin to build a predictions market that will allow users to invest in speculations about future events. Predictions markets have existed for several decades, but their resemblance to gambling has forced most markets that invest actual money out of business.

Prediction markets essentially work by allowing people to invest in the likelihood of a future event happening, such as Hillary Clinton winning the presidency in 2016 or Tom Hanks winning another Oscar. As noted by the Daily Princetonian, prediction markets function like stock markets: Participants trade shares, but their payoff is linked to the outcome of real-world events and their probability of occurring.

Prominent examples of such marketplaces include the Iowa Electronic Markets at the University of Iowa and the Hollywood Stock Exchange. The later is a game in which players use simulated money to make trades based on happenings in the entertainment industry. Such markets have proven to be reliable predictors of real-world events.

If all of this just sounds a lot like creative gambling to you, you’re not alone. The U.S. Commodity Futures Trading Commission (CTFC) has blocked one of the most popular U.S. prediction markets that uses real U.S. currency. In November 2012, the CFTC said Americans were no longer allowed to make Intrade.com purchases through U.S. banks, declaring such trades an illicit form of gambling.

But just like online poker before it, Bitcoin may offer a solution. The federal government similarly forbade American dollars from being used in online casinos. But Bitcoin, which is decentralized and operates largely free from federal regulation, has given gamblers and casino operators a profitable way of circumventing the law. In short, one could use Bitcoin in a prediction market without running afoul of authorities.

“Now that we have this beautiful decentralized system that allows two parties to transact with each other without a central authority, can we make it so that arbitration of events can be decentralized in some form?” asked Computer Science Professor Arvind Narayanan, the man behind the Bitcoin prediction market. “I think we’re converging on a successful design, but it’s too early to tell.”

Narayanan told the Daily Princetonian that his goal is to keep the market decentralized and open-sourced, reflecting the values of Bitcoin itself. The market is still in development.

Turning to Bitcoin won’t necessarily end all of prediction market traders’ problems. Though online gaming was able to bounce back last year using the cryptocurrency, that industry’s revival came at a time when Bitcoin was still flying under the radar of most federal regulators and policymakers. In the past 12 months, the federal government has taken an increased interest in the currency.

Various government bodies and agencies have begun seizing bitcoins from institutions for running afoul of money laundering laws, shutdown the infamous Silk Road marketplace, and failed to give full approval for btcoins to be used in political campaigns.