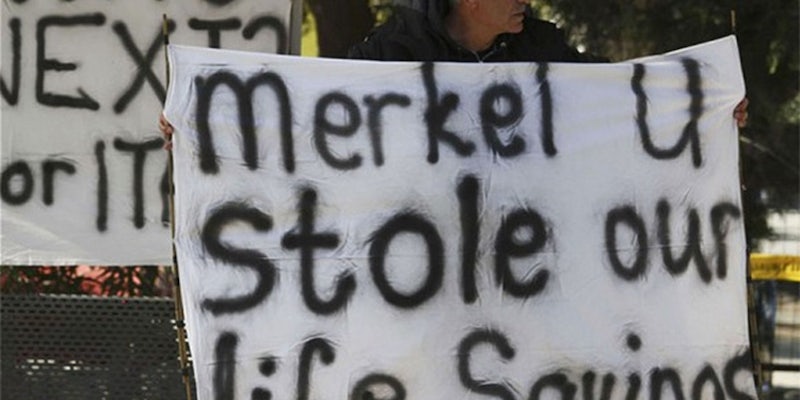 In response to a government bailout that took money directly from citizens' bank accounts, interest in Bitcoin is spiking in the tiny island of Cyprus. 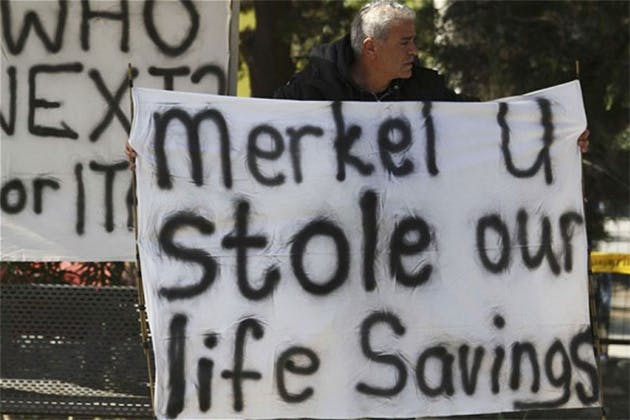 The tiny island of Cyprus became the center of the financial universe over the weekend, after its leaders, facing financial collapse and pressure from EU authorities, announced a plan that would let the government withdraw money directly from citizens’ savings accounts in order to fund a massive bailout of its flailing banking sector. As of publication, the measure seemed bound to be rejected by Parliament. But the idea lingers, and has sent shockwaves across a Europe struggling for financial stability.

Hear that? That’s the sound of Pandora’s Box being opened. Forget about the taxpayer bailouts that sparked Occupy Wall Street, European officials are now proposing directly picking the pockets of their citizens by going straight for their banking deposits, a move that Reuters says has “potentially severe consequences for the rest of the troubled euro zone.” Incidentally, it’s also turning furious (and fearful) Europeans to Bitcoin.

If you had money in a Cypriot bank on Sunday, your accounts are now a few percentage points short thanks to the “tax” on deposits—6.75 percent if you had under 100,000 euros in savings, and almost 10 percent for anything higher—a move that raised 5.8 billion euros. Officials compounded the move by restricting transfers of money outside of Cyprus and put limits on withdrawals to stem the inevitable run on banks, which are closed until Thursday. The whole ordeal could still collapse on itself, pending a possible vote, but the pandemonium is already in full force.

Cypriots are righteously pissed. Having mobbed any and every ATM throughout the weekend, mostly in vain, they’ve now taken to the streets brandishing “Hands Off Cyprus” signs in protest.

The entire global financial system is based really on one thing and one thing only: trust. And the first rule of Fight Club? You never mess with insured deposits, especially if you’re doing so to bail out corrupt bankers. The alternative would have been to impose those losses on investors (mostly Russia, in this case) for their terrible investment in Cyprus’s fabled secret banking system. Yet this so-called “bail-in” was opposed by the Cypriot government and the European Commission, German Finance Minister Wolfgang Schaeuble said on national television in the midst of the uproar.

Whatever the considerations, the golden rule is now broken. Even worse, officials have indicated that it might only be the beginning and haven’t ruled out more of the same.

The risks are obvious: broken trust and financial contagion. The decision “sets a dreadful precedent for the rest of Europe,” writes Desmond Lachman, an economist with the American Enterprise Institute. “No longer can depositors in Italy, Portugal, and Spain feel secure that their deposits are safe from confiscation in the event of the need for an IMF-EU bailout package.”

Unless European leaders do something drastic to address the situation, the pandemonium could easily spread to the rest of of the continent, where high unemployment in countries like Spain, France, and Italy have been deemed “socially explosive” by S&P’s German head Torsten Hinrichs. Spain especially is a debt-fueled ticking time bomb with depression-level unemployment that has left the country’s economy in tatters—also the result of rounds of bailouts and ill-advised austerity measures. Over a quarter of the country is without work, and the youth unemployment rate is now over 50 percent.

In light of the developments in Cyprus, Spanish citizens are getting nervous. How do we know? Interest in Bitcoin there is soaring.

Several Bitcoin-related apps on the Spanish iPhone market have zoomed up the rankings. Bitcoin Gold climbed the charts from 498 to 72 while Bitcoin Ticker rocketed to 52 from 526–all in a single day. And the value of bitcoins continue to rise, increasing over 10 percent week over week.

Since January, the value of the cryptocurrency has risen steadily

Read the full story at Motherboard.

By Alec Liu / Photos via Motherboard