O'Reilly's stats are going viral on conservative blogs, because of course they are.

When a grand jury decided declined to charge a New York City police officer for choking and killing Eric Garner, the case became the latest pretext for a national conversation about race.

Bill O’Reilly, the primetime patriarch at Fox News, weighed in on his show last night with an opinion that will surprise few people: Eric Garner’s killing, he said, had nothing to do with race.

When guest Tavis Smiley argued that “there is no respect for the humanity and the dignity for black life in this country,” O’Reilly had a response ready in the form of an infographic stating that many more whites were killed than blacks by police bullets in 2012. 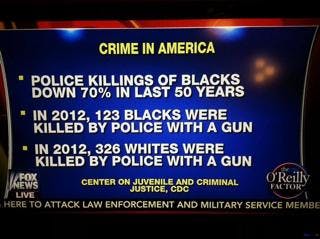 O’Reilly’s show is one of the most popular cable television programs. Millions watch it live on television and online. This segment in particular has been shared widely on conservative blogs as “proof” that racism in policing isn’t a problem. Conservatives are using screenshots of O’Reilly’s statistics as a weapon in emotionally charged arguments about racism (or the supposed lack thereof) in the American criminal justice system.

First of all, Americans should not cheer for themselves simply because police kill fewer black people today than in 1964, when Jim Crow and the civil rights movement led to some of the most disproportionately brutal resistance that the U.S. has ever seen.

Secondly, what O’Reilly’s statistics show—but what O’Reilly leaves unsaid—is that black people are killed at disproportionately higher rates than white people by police officers. African Americans are 14 percent of the population but 30 percent of the police-shooting deaths. This is double the rate that one might expect from O’Reilly’s fantasy world in which race is not a factor.

The numbers get even grimmer when narrowed down a bit. Police kill young black men at a rate 21 times higher  than the equivalent rate for young white men.

On a more fundamental level, O’Reilly’s statistics themselves are highly suspect. Efforts to track police killings are immensely problematic and widely understood to be plagued by undercounting. The federal government, from which O’Reilly pulled his numbers, has shown no interest in tracking unjustifiable homicides by police officers. Independent estimates are always higher than spotty official records, sometimes by a margin of 1,000 killings per year.

On top of that, police shooting reports are voluntary: Only 4 percent of American law enforcement agencies report killings to the FBI database from which O’Reilly took his statistics. In addition, questionable homicides are unlikely to be reported, and killings in federal jurisdictions like Indian reservations usually go uncounted.

The Killed by Police Facebook page, which maintains an independent tally of news stories on police killings, reports that at least 1,018 people have been killed by American police this year alone.

Without acknowledging the issues with his statistics, O’Reilly uses them to argue that the problem of police killings is so tiny either way—123 deaths out of 43 million black people is infinitesimal, he contends—that critics are making a mountain out of a molehill.

“The pattern is miniscule,” O’Reilly continued. “Again, 123 deaths out of 43-million-plus is minuscule. Every death is a tragedy. I’m with you. Three times as many whites are shot by police than blacks. I don’t think it’s hunting down blacks.”

Yes, the 123-police-killings-of-blacks statistic is tragic and disproportionate, but it barely scratches the surface of the problem with policing in the U.S.

More pervasive than police shootings are other forms of racial discrimination. In towns like Ferguson, Mo., officers disproportionately target African Americans for searches and arrests, even when white people are more frequently caught breaking the law. In cities like New York, statistics from the past decade show cops targeting African Americans as if they are all criminals, even though—as with white people, who are accorded the benefit of the doubt—the majority of black people stopped by cops are innocent.

African Americans are arrested three times more often than white people despite their constituting only 14 percent of the population.

This is not a simple issue. But as O’Reilly’s argument goes viral—it has more than 30,000 shares on The Blaze alone—it’s worth remembering that racial disparities in American policing go far deeper than the face of Fox News would have us believe.