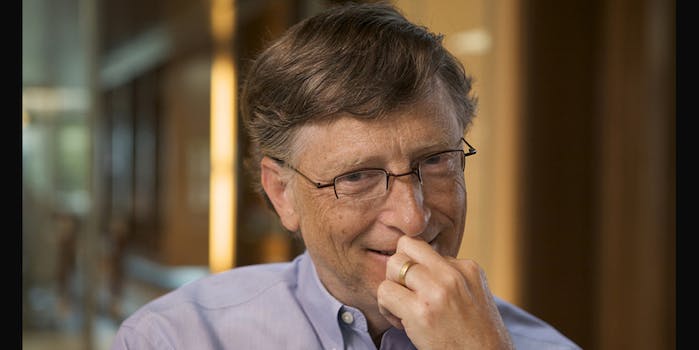 Bill Gates admits he recently switched to an Android phone

Windows Phone is so irrelevant even Microsoft's founder won't use it.

Not even Bill Gates uses a Windows Phone.

The billionaire said in an interview with Fox News Sunday that he now uses a smartphone operating system from a longtime Microsoft rival.

His mobile OS of choice? Android.

“No, no iPhone,” Gates replied.

Bill Gates talks about his relationship with Steve Jobs and his smartphone of choice. Full interview on Fox News at 10pm ET.

“I happen to use all Windows-based PCs,” Gates told Fox News Sunday. “The phone that I have, I recently did switch to an Android phone.” The business mogul then explained that it runs “a lot of Microsoft software.”

It’s not a good look for Microsoft that its founder doesn’t use its own mobile OS, but don’t blame Gates for making the switch. Windows Phone has slowly and painfully fizzled into irrelevance. Even at its peak, Microsoft’s long overdue thrust into the smartphone space trailed its rivals in key areas, and could never overcome a massive gap in available apps.

Its only sign of life came in 2014 when the software giant purchased Nokia, but the ill-fated acquisition all but killed off the Finnish smartphone legend and left consumers with a bitter impression of Microsoft. Windows Phone now owns less than 1 percent of the mobile market share and no longer sells handsets from major third-party hardware vendors like Samsung, HTC, and LG.

As Fortune points out, the Android device with “lots of Microsoft software” Gates teased may be the Samsung Galaxy S8 Microsoft Edition, a customized phone Microsoft created with help from Samsung. That device comes with a number of Microsoft services, like Office, LinkedIn, and Cortana.