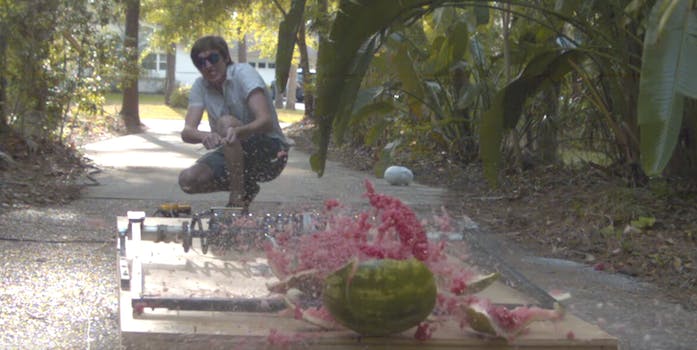 Here is a frightening, person-sized mousetrap that can crush a watermelon

When life gives you raccoons, use science to build a terrifying trap.

At their best, raccoons are among the cutest animals on Earth. They have little bitty hands, expressive faces, and are remarkably smart. However, their charms end when they start to get into your trash. Most of us would be content to call an exterminator to deal with the issue, but YouTuber the Backyard Scientist isn’t most of us. Inspired by a recent raccoon infestation, the Backyard Scientist decided to build himself a motorized, spring-powered, mega mousetrap instead.

Don’t worry; no raccoons were harmed in the making of this story, which is remarkable because this is one absurdly powerful mousetrap. Just look.

Setting this trap manually would be incredibly dangerous, so the Backyard Scientist installed an electric winch to tighten the trap’s coil. When the trap’s catch is released, the bar swings down at a speed of 42 mph, destroying everything in its wake. As you can tell from the watermelon above, that’s a lot of force.

Thankfully, the Backyard Scientist didn’t use this on any animals. It would be inhumane, and clean up is already intense without adding pieces of an exploded raccoon to the mix.

You can watch all of the Backyard Scientist’s video right here on YouTube.