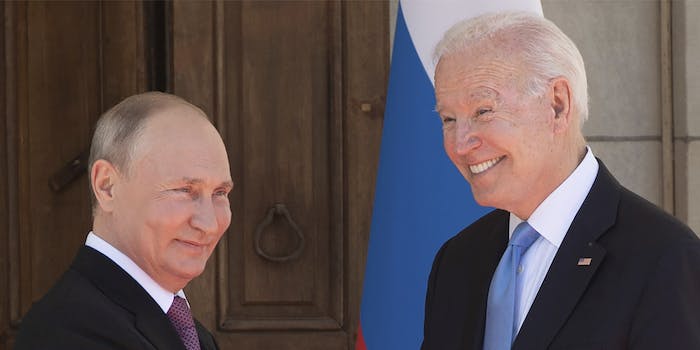 Biden just smiled at Putin. Conservatives are melting down

Was the smile bad or good? Internet pundits are divided across party lines.

President Joe Biden had his first sit-down with Russian President Vladimir Putin today. And it was either a historic showdown from the man who won back control of the White House from a Russian asset or the biggest acquiescence to the Soviets since the onset of the Cold War.

It just depends on if you think smiling is OK.

During his handshake with Putin—who is either America’s biggest geopolitical foe or a piddly annoyance as the head of a rapidly collapsing former superpower—Biden smiled at him.

Was it Kennedy-esque sly charm to leverage in future negotiations or a bumbling Jimmy Carter grin presaging an oafish cowering to the red menace?

According to CNN’s Jim Scuitto, Biden’s smile while Putin appeared to look away was about projecting strength. It was a take that many supporters of former President Donald Trump bashed as fawning sycophancy.

Meanwhile, in a deleted tweet, Mike Pence’s former spokesperson Alyssa Farah said they deliberately made sure Pence did not smile when meeting with Putin to convey the gravity of the matter. Though she deleted the tweet, she has since retweeted another post criticizing Biden’s chompers.

To others, though, it was a smile that was deft enough to make Putin uncomfortable.