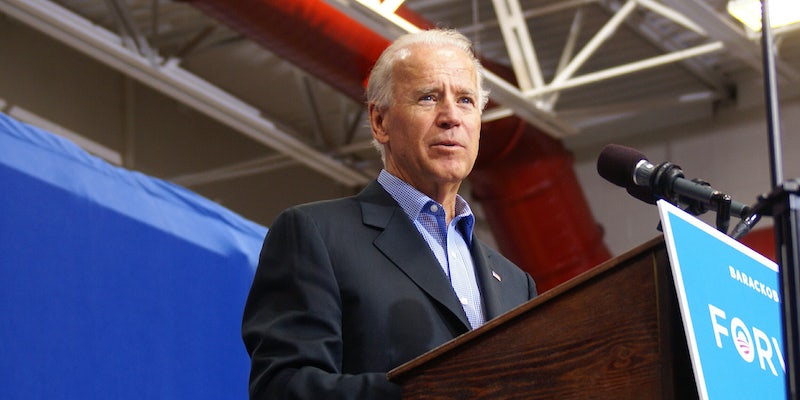 Former Vice President Joe Biden announced on Monday that he will embark on a speaking tour across the country later this year as he promotes his new book—sparking renewed cries for him to challenge President Donald Trump in the 2020 presidential election.

Biden’s “American Promise Tour” will start in early November and end in December, according to the book’s website. In a tweet, Biden called the speaking tour “a series of conversations” with a tagline on a promotional image touting the tour as a way of “finding purpose in a time of uncertainty.”

Excited to share news about #AmericanPromiseTour – a series of conversations I’m hosting around the country https://t.co/Y7IzxKqXtV pic.twitter.com/lpVu14LZsZ

Biden’s book, titled Promise Me, Dad, will be released on Nov. 14.

The announcement of his speaking tour coincided with the release of an op-ed the former vice president wrote in the Washington Post assailing the Republican-led effort to repeal and replace the Affordable Care Act.

In the opinion piece, Biden picks apart the Republican’s plan to overhaul the American healthcare system, arguing that their legislation would leave fewer American’s with healthcare coverage.

“Let’s again make the commitment that in America, healthcare is a right for all, not a privilege for the wealthy,” Biden wrote.

Between the op-ed and the announcement of the cross-country book tour, the semi-regular calls for Biden to consider running for president in 2020 against Trump grew louder online.

A recent poll by Public Policy Polling found Biden would beat Trump in 2020 by a 54-to-41 percent margin.

Biden had the largest lead against Trump against potential Democratic 2020 candidates such as Sens. Bernie Sanders, Elizabeth Warren, Cory Booker, and Kamala Harris, according to the poll.

I sense a presidential run incoming…

Mr.Biden America needs you now more than ever.