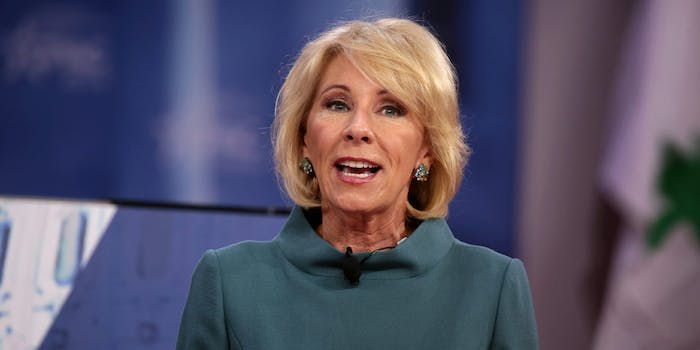 A lot of people were unhappy.

The Education Department, under the leadership of Secretary Betsy DeVos, is reportedly considering the idea of using federal funds as a way to arm teachers—an idea President Donald Trump has brought up in the wake of several school shootings that have happened in the last year.

The New York Times reports the department is looking at using the Student Support and Academic Enrichment grants program, which unlike other sources of money, does not bar the ability for the government to arm teachers or school districts.

The program is meant to be used for educational opportunities in poorer school districts, according to the Times, but could allow DeVos to approve any district that wants to arm teachers, as the president has suggested on numerous occasions.

Arming educators has been an idea fought since the moment it was floated by the president, after the school shooting in Parkland, Florida, that left 17 people dead.

The news of the Education Department considering using federal funds to do so was met with resistance online, including among elected officials or candidates for office.

Alexandria Ocasio-Cortez, a candidate to represent a segment of New York City in Congress, quickly denounced the idea.

“94% of teachers spend out-of-pocket money for their classrooms. The fact that we can find money for guns in schools, but not enough for new books and supplies, tells you that this is an investment in the school-to-prison pipeline,” Cortez wrote.

Others had similar sentiments, including a number of elected officials.

The State of New Jersey will not be part of this dangerous and misguided idea of arming our teachers. @realDonaldTrump should use our tax dollars to provide all children with the education they deserve, not turn our classrooms into warzones.
https://t.co/QF6m37MAPZ

Betsy Devos proposes spending federal money to arm teachers. The same teachers who use their own funds for school supplies….hmmmm maybe we should arm them with school supplies.

As you walk your kid to school today, think about what you will do between now and Election Day to vote out every single Congressperson who supports this insane idea.

Whether she gets away with this is in our hands. November is coming. https://t.co/S92yrJIAW6

Schools can’t afford to give classrooms their own supplies.

Show that you give a damn about students. https://t.co/zkHJJuPNeT

Many schools can barely afford nurses or counselors for students – and teachers dip into their own pockets for basic supplies. Now @BetsyDeVosED wants to allow schools to use limited federal education $ to put guns – GUNS – in classrooms? That's the dumbest idea I've ever heard. https://t.co/b79CP4xZIe

76% of school districts have children with school lunch debt.

2.5% of elementary and secondary students are homeless.

Betsy DeVos wants to buy guns for teachers to make schools more unsafe instead of addressing these crucial problems.

Guns don’t belong in schools, Ms. DeVos. There is zero evidence that arming teachers would provide any kind of deterrent against mass shootings—it would only turn our schools into fortresses. https://t.co/gYc9tXgYKQ

Betsy DeVos and the Trump Admin is moving unilaterally to use YOUR federal tax dollars to put guns in teachers' hands.

They can barely get our teachers classroom supplies, but here's a Glock?? https://t.co/c6MzRvL6eN

Even a Parkland victim’s father pressed back against the idea.

“The NRA spent $30,000,000 to elect Trump. Betsy DeVos is using the murder of my daughter to justify a return on that investment. November cannot come soon enough. #OrangeWaveInNovember,” Fred Guttenberg wrote.

The NRA spent $30,000,000 to elect Trump. Betsy DeVos is using the murder of my daughter to justify a return on that investment. November cannot come soon enough. #OrangeWaveInNovember