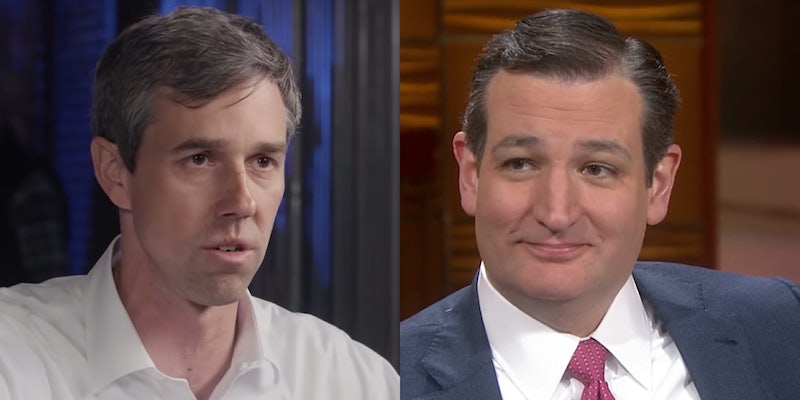 President Donald Trump once called Sen. Ted Cruz (R-Texas) “Lyin’ Ted.” While the senator might wish everyone had forgotten all about that, his opponent Beto O’Rourke revived the nickname during Tuesday night’s debate in San Antonio.

O’Rourke’s comment came in response to Cruz’s criticism of the Democrat’s desire for a tax on oil production.

“Senator Cruz is not going to be honest with you,” O’Rourke said. “It’s why the president called him Lyin’ Ted, and it’s why the nickname stuck. Because it’s true.”

Beto slams Cruz: ”Senator Cruz is not gonna be honest with you. He’s gonna make up positions and votes I’ve never held or taken. He’s dishonest. It’s why the President called him lyin’ Ted, and the nickname stuck, because it’s true.” #TeamBeto #TexasDebate pic.twitter.com/jbS4T2AHjG

Cruz laughed it off and tried to turn attention back to polls that show the Democrat falling behind the Republican.

“Well it’s clear Congressman O’Rourke’s pollsters told him to come out on the attack,” Cruz said.

Trump referred to his then-presidential opponent Cruz as “Lyin’ Cruz” repeatedly during his 2016 campaign.

Lyin'Ted Cruz is weak & losing big, so now he wants to debate again. But, according to Drudge,Time and on-line polls, I have won all debates

Going to Salt Lake City, Utah, for a big rally. Lyin' Ted Cruz should not be allowed to win there – Mormons don't like LIARS! I beat Hillary

Failed presidential candidate Mitt Romney, the man who "choked" and let us all down, is now endorsing Lyin' Ted Cruz. This is good for me!