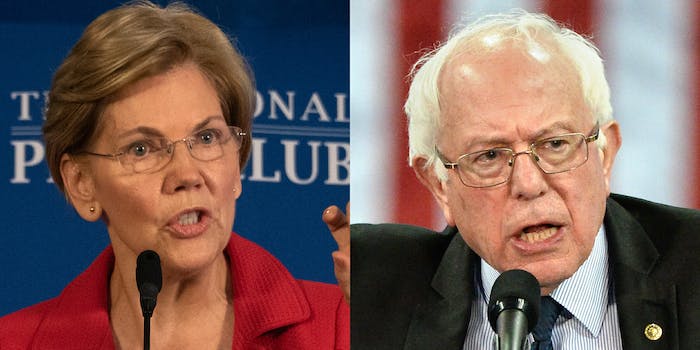 What are the key differences between Bernie Sanders and Elizabeth Warren?

It's not just the policies. It's how they get there.

When Sen. Bernie Sanders (I-Vt.) joined the 2020 Democratic primary last week, some argued that there was already someone in the race with almost identical views: Sen. Elizabeth Warren (D-Mass.). Some even suggested that to vote for Sanders over Warren could only be a matter of sexism.

But there are clear differences between the two that should be taken into account.

Sanders and Warren do support some of the same marquee policies, including Medicare for All, $15 minimum wage, and a Green New Deal. Both have called our criminal justice system racist; both favor gender pay equity. But their political philosophies are very different. The answers on their homework might look the same, but when you look closely, you see that they take a very different approach to each equation.

Famously, when asked if she was a socialist, Warren identified herself as “capitalist to my bones.” Sanders, by contrast, has been a committed socialist for decades. Warren is a reformer, who believes that capitalism can be reigned in and regulated. Sanders vision is more revolutionary: he wants to redefine the way America works, taking power away from capital and placing it in the hands of working people.

Would a Sanders presidency look vastly different from a Warren presidency? Perhaps not. But, if a Democratic primary is about assessing competing visions for America’s future, then these differences matter.

Bernie Sanders vs. Elizabeth Warren: On the issues

Sanders and Warren have both called for breaking up the big banks. But, their terms for dividing the banks are different: Sanders proposes a hard cap on financial size where Warren would break them up by function (separating commercial and investment banks).

Warren has been a dogged financial watchdog throughout her political career, encouraging oversight with moves like creating the Consumer Financial Protection Bureau. Her punitive policies stop short of radically redistributing wealth, whereas Sanders pushes further. Both have proposed tax plans that target the wealthy, and Sanders’ plan would tax more wealthy individuals and restore a 70 percent marginal tax rate on the wealthiest Americans (though both plans project between $2-3 trillion in revenue).

You can see further differences between Sanders and Warren when it comes to the structural difference of their proposals. Warren’s “Accountable Capitalism” plan would require corporations to have workers comprise 40 percent of their board, while Sanders has made a point to bolster and promote a more militant labor movement with legislation aimed at building union strength like his “Workplace Democracy Act.”

Generally, the candidates support each others’ proposals, but the policy they write comes from two very different points of view.

Warren is a co-sponsor of Sanders’ Medicare for All bill, but that doesn’t mean they have the same plan for American healthcare.

Sanders believes that a single-payer system that features one health program with comprehensive coverage of all Americans that is free at the point of service is the only viable, long-term solution for America’s healthcare woes. For Warren, there are a number of possible paths to universal coverage, and some of them might involve the continued dominance of private insurance companies in a marketplace.

For Sanders, the goal is not “affordable” healthcare, but reframing healthcare as a human right that the government extends to all of its citizens, regardless of what they can “afford.”

Warren’s defining reticence to transform America’s capitalist system is also evident in her views on education. Sanders wants to make public college tuition-free. While Warren has come around to that point of view recently, she has generally supported regulation like public aid and increased oversight rather than disruption.

At a 2015 speech to the American Federation of Teachers, Warren said:

“Democrats talk about resources, pointing out that we’re no longer investing in our kids the way we once did. Republicans talk about risks and incentives—arguing that students take on debt without fully understanding the consequences, and that colleges get access to federal dollars pretty much no matter the quality or cost of the education they provide. Here’s the truth—both sides are right.”

While both Warren and Sanders vocally support teachers’ unions, oppose charter schools, and have been critics of Education Secretary Betsy DeVos, Warren has played both sides of public education policy. In the past, she has supported school vouchers, which many see as destructive to public education, whereas Sanders has been more consistent in his unequivocal support of public schools.

Here again, there is a contrast between Warren and Sanders, in substance if not in rhetoric. Warren supports “the idea of a Green New Deal” while Sanders has promised to expand on the Green New Deal resolution championed by Rep. Alexandria Ocasio-Cortez (D-N.Y.) and Sen. Ed Markey (D-Mass.).

The climate legislation that Warren has offered has been far less inspiring than something like Ocasio-Cortez’s vision of a Green New Deal. One proposal was to force corporations to disclose climate-related risks. While this is a solid proposal, it feels like a lot of other “too little, too late” legislation championed by other rank-and-file Democrats.

Though both candidates have opposed Saudi Arabia’s aggression in Yemen and have moved to end American military involvement in Afghanistan (and both have been slow to criticize Israel),

But we see that they get to good conclusions using different thought processes.

In her Foreign Affairs essay laying out her foreign policy vision, Warren says that America began running into problems abroad relatively recently, as it “began to export a particular brand of capitalism” in the post-Cold War era. By contrast, in Sanders’ recent book, he draws a line of imperialism through U.S. history, from post-World War II intervention in Iran through CIA support of Central and South America in the 70s and 80s to the 21st century War on Terror.

These philosophical distinctions have real consequences. Look at the prospective coup in Venezuela. The Trump administration seems poised to install right-winger Juan Guaidó and overthrow authoritarian President Nicolás Maduro without an election. Warren said recently on Pod Save America that she supports the “diplomatic part” of the coup, and disapproves of the “saber rattling.”

Though Sanders has been critical of Maduro, he has said, “what must not happen is that the United States must not use military force and intervene again as it has done in the past in Latin America, as you recall whether it was Chile or Guatemala.”

The reformer and the revolutionary

But, these differences are worth considering because there is a meaningful difference between Sanders and Warren.

Republicans are, and have always been, boldy and unapologetically the party of capital. Tax cuts and deregulation are the primary goals of each Republican administration. That isn’t going to change. The question a primary voter must ask themselves is if capital is to be opposed head-on and challenged (Sanders) or regulated and negotiated with (Warren).

The big picture changes that Warren or Sanders could achieve in a single presidential term may not be far off. Most Sanders supporters would likely feel fine supporting Warren in a general election and vice-versa. But, with almost two years until the winner of the primary faces Trump, diminishing the differences between these two progressive standard bearers does neither the candidates nor the voters any favors.