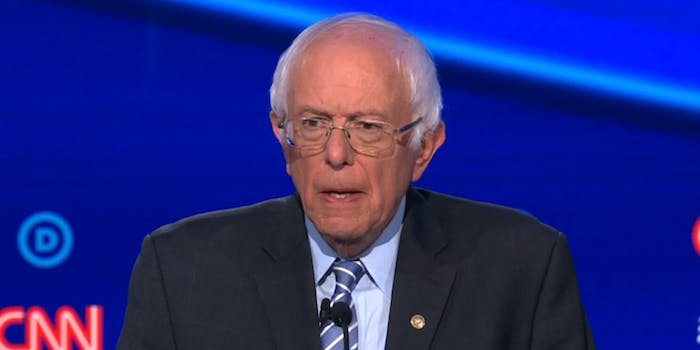 The joke drew applause and laughter from the audience at the debate.

Sen. Bernie Sanders (I-Vt.) cracked a joke during Tuesday’s 2020 Democratic debate that he didn’t use medical marijuana before getting on the stage after being asked about his health.

Sanders, who recently suffered a heart attack, was asked by a moderator about his health as part of a larger discussion about the age of a potential president.

The Vermont senator quickly tried to assure that he was in good health. Sen. Cory Booker (D-N.J.) interjected, noting that Sanders was in favor of medical marijuana use.

In response, Sanders joked that he was “not on it tonight.”

“I’m healthy, I’m feeling great…,” Sanders said in response to the question about a president’s age.

“Senator Sanders is in favor of medical marijuana, I want to make sure that’s clear as well,” Booker said.

“That’s true. I’m not on it tonight,” Sanders said, smiling.

(Moderator tries to pivot from opioids/pot to Bernie’s health)

SANDERS: I’m healthy, I’m feeling great, but I would like to respond to that question.

BOOKER: Senator Sanders is in favor of medical marijuana, I want to make that clear.

SANDERS: I’m not on it tonight. pic.twitter.com/BBlyMcDcfD

The response from Sanders drew applause and laughter from the audience at the debate.