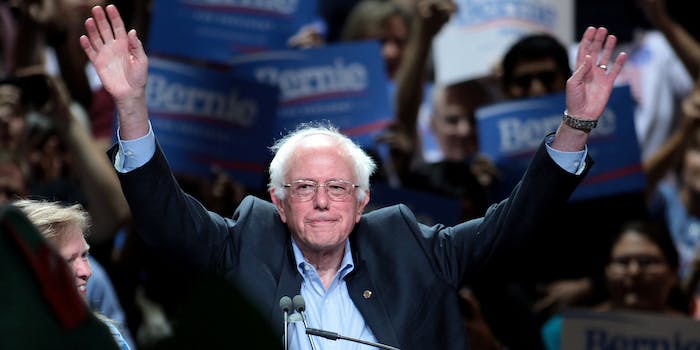 Civil rights activist DeRay Mckesson, plus “many [other] folks,”  received word on Monday that their public efforts to meet with the Sanders campaign were rewarded with a meeting to be scheduled this week.

@deray Let's do it. We will PM you this week to arrange.

The relationship between the Sanders presidential campaign and Black Lives Matter movement started with conflict, but it increasingly appears to benefit both parties.

Sanders has achieved unprecedented visibility after Black Lives Matter protests erupted at his campaign events. Protesters, on the other hand, have succeeded in convincing Sanders produce an extensive new racial justice platform as part of his campaign.

Mckesson is a prominent member of the Black Lives Matter movement, as well as someone who has publicly praised Sanders throughout the summer, calling the senator’s racial justice platform “powerful” on multiple occasions.

The "violence" framing in the initial draft of the Sanders Racial Justice platform is powerful. & I look forward to seeing him expand this.

I just heard Bernie Sanders on the radio with powerful statements on race, police reform, and employment. I need to find this transcript.

In addition to suffering from relatively low visibility in general compared to Democratic rival Hillary Clinton, Sanders is especially unknown in minority communities.

Turning conflict into partnership with Black Lives Matter appears to both align with his political past as well as appeal to an important voter base that hasn’t yet “felt the Bern” that so many of Sanders’ many white supporters have been excited about throughout the year.

Within a few days of shutting down multiple Sanders’ speeches, Black Lives Matters protesters showed up at Hillary Clinton and Jeb Bush events as well, even landing a closed-door meeting with Clinton. That one produced mixed results.