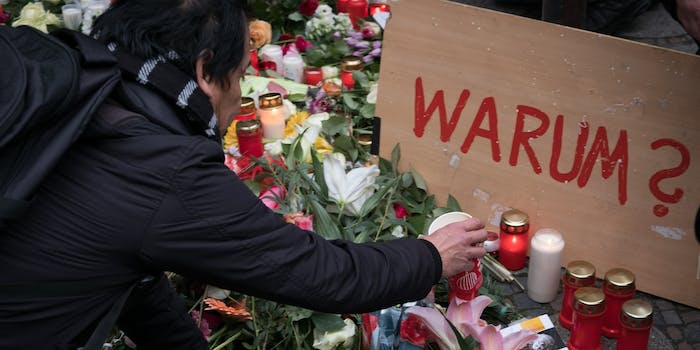 The suspect is to be considered armed and dangerous.

A manhunt across Europe is currently under way for a new suspect who is thought to have been behind the deadly truck attack on Berlin’s Christmas market on Monday evening.

The warrant was issued at midnight on Tuesday for the suspected killer, Tunisian-born Anis Amri, whose identification documents were left under the truck cab’s driver’s seat. Over 150 German police officers are said to be involved in the search for Amri, which spans western Germany, particularly the area of Emmerich, where the residence papers were issued.

The assailant, having commandeered the truck, crashed the 19-ton vehicle at high speed through a Christmas market in the city. At least 12 people are known now to have been killed and some 49 injured. In the chaos that followed, the perpetrator escaped.

The current lead on Amri comes after the so-called Islamic State claimed responsibility for the apparent lone-wolf attack. Police had questioned and released another individual, since declared a non-suspect, whom they arrested near the scene on the night of the attack.

Through it's 'Amaq News Agency, #ISIS claimed that the vehicular attacker in #Berlin #German is a "soldier of the Islamic State" pic.twitter.com/LZ7aJij3aG

Also found in the truck cab was the body of a man, now identified as Lukasz Urban, the truck’s driver. The 37-year old from Poland was reportedly driving a long-haul delivery across Europe. He appeared to have been stabbed and shot by the hijacker.

Already details about the suspect are beginning to emerge. The Associated Press, who have had access to the warrant document write that Amri “has at times used six different aliases and three different nationalities” and that German national authorities rejected his asylum request.

Meanwhile, national newspaper Sueddeutsche Zeitung claims that Amri has been identified as having moved in circles with a local Islamist preacher known as Abu Walaa, or “the preacher without a face,” who was himself arrested in November over links to ISIS.

Police are warning the public that the man is armed and dangerous. Anyone looking for someone who may have been at the site of the deadly crash can call 030 54023 111 for more information.