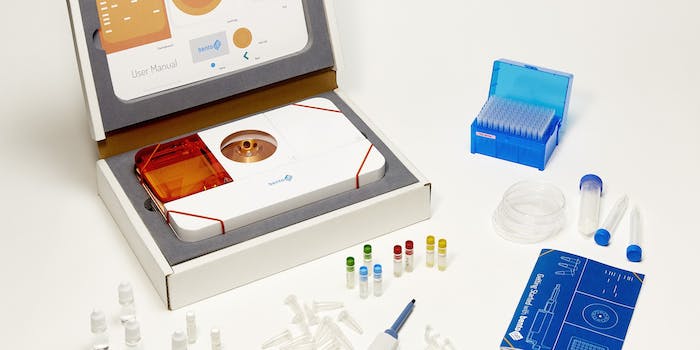 Most people are happy to just spit in a tube and get their DNA lab-test results six to eight weeks later. But some do-it-yourselfers won’t be satisfied until they’ve donned latex gloves and isolated their DNA themselves. Now, Bento Lab is here to offer DIY DNA testing.

Bento Lab’s team of scientists, engineers, and artists designed a mobile DNA laboratory that is smaller than your average laptop. According to Bento Lab’s website, applications range from home brewers genotyping their yeasts to biologists seeking to do lab work in the field.

The kit, which reached its funding goal on Kickstarter within 36 hours, contains everything you need to isolate and identify DNA.

There are reagents to break down samples of things like meat, hair, spit, and anything else that may contain DNA. There’s a centrifuge to spin the DNA into layers that can be extracted with a special pipette. There are other reagents that, when exposed to the right temperatures in the included thermocycler, will amplify certain segments of DNA, if they’re there in the first place.

After that, users put their samples into the electrophoresis portion of the kit, where the broken-up and amplified DNA segments separate out along a gradient, letting people look for certain genes by checking whether or not certain bands show up.

If all of that sounds overwhelming to you, the kit also comes with a detailed instruction manual that describes some of the experiments you can perform. For example, you can check to see whether you’re a carrier for a particular “athlete” gene.

The kit also comes with 6 hours of Skype “office hours,” letting users consult with experts to be sure they’re doing everything right.

Bento Lab also plans to offer a slimmed-down version of the kit to scientists, who can use it in the field with their own reagents and other equipment.

The kit will also be completely open source so that users can share knowledge and expertise in a way that benefits everyone.

The product will cost less than $800, which is far more affordable than buying actual laboratory equipment but may still be too steep a price tag for the Average Joe, inquisitive or not.

Bento Lab is marketing the kit as a way to make science accessible to everyone through hands-on learning, but it’s unclear whether people without advanced scientific knowledge will be interested. Even with a detailed instruction manual, a lack of understanding of the basic mechanics of each step of the process could detract from the richness of the overall experience.

But for people in specialized fields like fermentation or art, which could benefit from a little DNA testing, Bento Lab might be the one-stop solution that they need. Instead of sending samples to labs, they could do the work themselves.