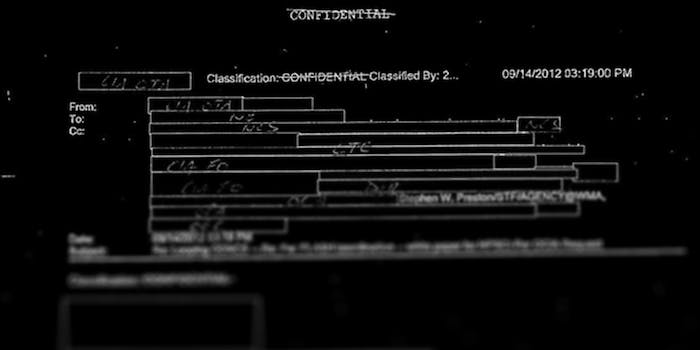 What the released Benghazi emails reveal about the White House

In an effort to silence critics, the White House this week released 100 pages of emails relating to the attack in Benghazi, Libya, on Sept. 11, 2012.

In an effort to silence critics, the White House this week released 100 pages of emails relating to the attack in Benghazi, Libya, on Sept. 11, 2012. The emails show the process that President Barack Obama’s administration, the CIA, and the State Department went through to create public talking points in the days following.

Critics and Republicans say that the White House tried to politicize the terrorist attack. The attack killed Ambassador Christopher Stevens and three other Americans who were at the U.S. diplomatic compound.

The emails are available to view on CNN’s website. At one point, the papers were deemed “TOP SECRET” and “CONFIDENTIAL.” Most of the contact information and personal email addresses have been blacked out for security purposes. The emails show the back-and-forth between the various agencies, trying to determine what would be an appropriate series of talking points to release to the public.

“Collectively, these emails make clear that the interagency process, including the White House’s interactions, were focused on providing the facts as we knew them based on the best information available at the time and protecting an ongoing investigation,” said spokesperson Eric Schultz.

Protecting the ongoing investigation of the FBI was critical, according to the emails, and made some officials want to guard more information. The initial talking points were sent out by the CIA on Sept. 14 at 11:15am. By the afternoon, the White House was already making notes. There is discussion early on over whether the incident should be called an “attack” or a “demonstration.” The White House also encourages the CIA to include information about similar demonstrations elsewhere.

How the email release will affect the storyline of the Benghazi attack is unknown. However, it’s just another piece of what is becoming a long and ugly week for the White House, which is being hit with one scandal after another.