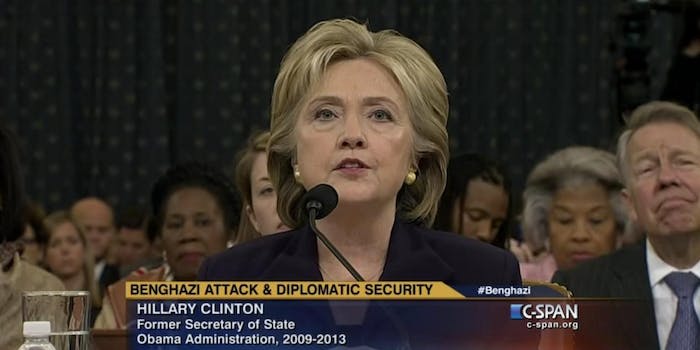 Eleven hours? Ain't nobody got time for that.

For more than 11 hours on Thursday, the House Select Committee on Benghazi questioned former Secretary of State Hillary Clinton about her conduct surrounding the Sept. 11, 2012, attack on a U.S. compound in Benghazi, Libya, that killed four Americans.

Given that it’s unlikely a sane person would binge-watch the entire day-long hearing (let alone read it), the New York Times has brilliantly distilled the epic political show into a mere three minutes of key moments.

Republicans on the committee focused on a range of details, including denied requests for additional security in Benghazi, Clinton’s emails regarding the State Department’s outpost, the aftermath of the attack, and her statements to the American public—which Rep. Trey Gowdy (R-S.C.), head of the Committee, characterized as false.

Democrats countered these attacks, accusing the Republican members of the Committee of using the hearing purely as a way to damage Clinton’s chances in the 2016 Democratic primary, a race she is currently winning. The Republicans countered this counter-narrative, saying they were simply trying to shed light on a terrorist attack that took Americans’ lives.

It remains unclear whether they achieved that goal.

If even three minutes feels like more time than you want to spend on this topic, there’s always a good GIF to sum things up:

What you need to know about the Benghazi hearing. pic.twitter.com/iBQEGijcqe